When Neil (David Magowan) meets Heather(Faye Sewell) at a party, certainly neither of them is aware just where the relationship is headed. Almost on a whim, the two find themselves in the spell of Machlis( Brian Carter), a medium who specialises in opening up the mind to the possibilities of parallel dimensions. As Neil and Heather delve deeper, the characters split, taking on separate realities, which are in danger of crashing into one and other.

In many ways writer/star Magowan brings a refreshing idea to a genre often burdened with gore or exploitation. Parallel attempts to marry an interesting idea with a Hitchockian twist, to the low budget roots of mumblecore. Its a valiant effort, and it would be ignorant not to acknowledge that the film has the best intentions at its heart. After all, no one sets out to make a bad movie, and independent film making, particularly in the UK, can be extremely limited and difficult.

Sadly, there is the cinematic rub, as Parallel’s biggest problem lies in these very places: the constraints of its budget.

For a start, the sound design is all over the place, one minute too loud, the next drowning out dialogue with synth score that resembles elevator music, if the elevator was going to Hell. And I’m not sure if using cricket sound effects for a night time exterior shot of a high rise in London, was the wisest of atmospheric choices.

Then there are the performances. If anything, most of the cast look bored. Magowan plays Neil just too smug, which seriously jeopardises likeability, and while the women are at least given the majority of the heavy lifting, another smart subversion of a genre that too often looks to women as eye candy or damsels in distress, the whole enterprise seems a little too amateurish.

The exception here is Brian Carter, as the enigmatic and mysterious Machlis, who simply acts everyone else off the screen, clearly more than aware of how to play such a bold premise. 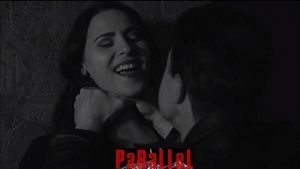 The film also has little sense of pace, in spite of some interesting, creative editing, dragging in the second act, just as the plot should begin clicking together. A shame, really, as the script manages to juggle its concept with a certain amount of skill, particularly as the characters fracture off into two different realities, although the dialogue could do with a polish.

Hardly Aaron Sorkin, although you will leave Parallel safe in the knowledge that someone out there thinks that the term ‘bum bongos’ is a perfectly acceptable bit of foreplay.

Makselyte’s direction is, for the most part, good enough to hold the piece together, the film maker’s love of the genre clearly evident in its film noir tropes, and some of the darker, more colourful aspects of the cinematography lift certain scenes out of mundanity.

The film’s tagline reads: No one should look at their parallel.

This sadly proves a little too prophetic.

If you ever wondered what Sliding Doors might look like if it had been abused by Christopher Nolan, then Parallel might be your bag of popcorn. For everyone else, there will be the growing sense that what we have here is a film with commendable ambition, but hackneyed execution.

Parallel is available to watch now on Amazon Prime.