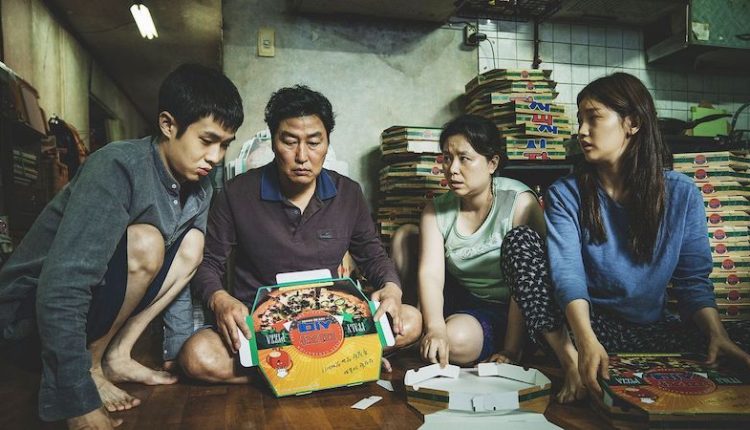 This year, Snowpiercer director Bong Joon-Ho received the Palme d’Or at Cannes for his latest feature, Parasite. It not only is a frontrunner for the 2020 Best Foreign Language Film Oscar and has already earned more than $118 million worldwide, making it Bong’s most commercially successful film to date.

At first glance, Parasite seems like a black comedy about a struggling family who depends on free Wi-Fi and dreams of their next scheme. So when the gullible Mrs Park (Cho Yeo-jeong) needs help with her kids, the Kims are quick to step in with smiles and fake references. Despite the connections with their supposed victims, the Kims’ indifferent attitudes to their assumed roles betray their one-track dreams of an easy life. However, we gradually discover a darker side to their materialistic dreams as their scheme evolves.

The juxtaposition between the Kims and the Parks is visually striking. From the characters’ interactions with each other to their own homes, Bong offers a window to two social extremes in South Korea, as well as the clash of classes that define them. Although they are poor, the Kims are close-knit, supportive and comfortable in their bug-infested basement. In comparison, the dysfunctional Parks are emotionally closed off and seemingly indifferent to each other’s issues – in fact, the only time they are truly expressive is when they are with the Kims. Neither can be cast as heroes or villains, but the stark comparison between them evokes underlying classist tension and resentment that brew until Parasite‘s unexpected climax.

Bong cleverly creates a multi-layer narrative so there is more than a mere scam. As soon as this unpredictable social satire feels like it’s drawing to a close, he builds an entertaining web of intrigue. Complementing his wonderful direction and darkly comic screenplay is the great cast and Hong Kyung-pyo‘s beautifully minimalist cinematography, which creates an almost organised setting and a perfect playground for chaos.

Once the storm has calmed down, it is not hard to see why Parasite was the unanimous winner of the 2019 Palme d’Or. Stunning and intricate, it is simply brilliant.

Parasite is out in UK cinemas on Friday 7 February.