At least this time he doesn’t have to pretend it’s not a biopic. Welcome to New York, the film that was only “inspired” by Dominique Strauss-Kahn’s sexual misadventures still has the threat of a lawsuit hanging over it. Abel Ferrara might be on safer legal ground with Pasolini, but the subject is far more daunting. Despite bags of style, this insubstantial film about a very substantial man can’t help but give the impression that he’s bitten off more than he can chew.

Over the course of his turbulent career, Pier Paolo Pasolini worked across so many mediums it was hard to keep count. He was a poet, novelist, journalist, political activist, philosopher and director all rolled into one. Ferrara wisely avoids straying far down any one path. When asked what he considers himself to be, his Pasolini tells a journalist that he simply puts writer on his passport.

Willem Dafoe, acting with an American accent and sunglasses, gets the intimidating title role. He’s a passive figure for much of Pasolini, an observer of life. Like an iceberg, what you see is only ever a fraction of the man. In the same interview, he asks to be left the questions so he can write notes. He expresses himself better in writing you see. Occasionally, that rich inner world floods to the surface. The ills of society, consumerism high amongst them, spark animated denunciation. Later, setting out the story for his new film, his voice glows with passion. Otherwise, he recedes into an imperceptible calmness. 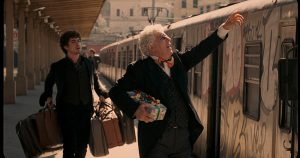 Ferrara matches this with an elegant visual style. The surroundings are plush, the dress smooth and downplayed. Many scenes are dimly lit, the light unable to penetrate the exterior world just as it fails to reach his interior. Even the grimier locations take on a shine in the dark. The beach, the place of his death at the hands of a male prostitute, has a noirish sheen. Pasolini is more likely to find Bogart lurking in the corner cigarette in hand than it is to replicate the director’s own unique neorealist style.

This is not the complete life of Pasolini and yet it also partly is. The film covers only his final day but into that come the varying components of his life. He discusses his politics and the problems that he sees besetting the world. He mixes with admirers and strays into homosexual liaisons. He works on films and he writes. He dreams up extravagant ideas and orders them to commence with a flick of the tongue. He’s charming and erudite, complex and unknowable. Ferrara’s snapshot offers tribute over insight. He’s created his own Mona Lisa, placing Pasolini just out of reach and moving everyone on after they’ve just started to become accustomed to the glare.

Pasolini is handsome but little more. Summing up Pier Paolo Pasolini’s life in 87 minutes was always going to be a tough ask. 800 might still not be enough.