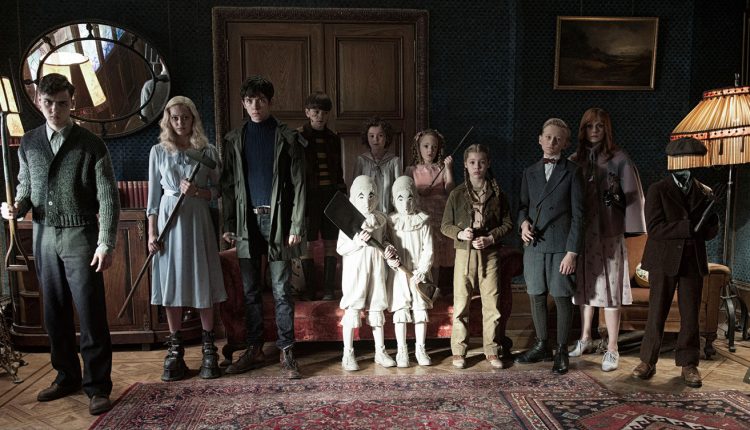 Is there a more perfect match between director and material than Tim Burton’s charmingly creepy take on Miss Peregrine’s Home for Peculiar Children? Ransom Rigg’s eccentric best-seller about a collection of adolescent oddities is so evocative of the Wacky Wizard of Gothic Fantasy’s style that it’s almost impossible to imagine anyone else at the helm. Sadly, while the visuals are indeed as wonderfully weird as you could wish, they are let down by a script that’s extraordinarily ordinary.

There’s plenty within Rigg’s story – fashioned from strange photographs he gathered from flea markets – that will feel familiar to anyone acquainted with Burton’s distinctive oeuvre. Asa Butterfield’s lonely teenager Jake is of the same mould as Edward Scissorhands, an alienated outsider trapped in a hyper-surreal vision of suburbia. He even has an elderly carer acting as a surrogate father-figure in the form of Terence Stamp’s adventurous grandfather, who regales Jake with tales of peculiar children and dramatic battles with fantastical monsters. And like Big Fish, the sudden loss of this close bond drives Jake on a whimsical voyage as he sets out in search of the fabled orphanage of his grandfather’s stories to see for himself if it really exists.

And exist it certainly does, tucked away on a remote Welsh island like Charles Xavier’s School for Gifted Youngsters – only the unusual abilities this collection of misfits posses won’t be of much use should Magneto come calling. They include a green-fingered pre-teen who can control plants, a little girl with razor-sharp teeth at the back of her head, a small boy with a belly full of bees and a manic pixie dream girl so flimsy she would literally float away if she weren’t anchored by a pair of lead boots.

Burton’s off-kilter imagination is in full flow whenever the Peculiars are on show, with plenty of visual delights to behold. There’s a strangely charming stop-motion duel between two reanimated dolls; an (almost literally) breathtaking sequence in which Emma (Ella Purnell) raises a sunken, rusting cruise ship from the bottom of the sea that is spectacularly haunting; a darkly off-beat set piece which sees Miss Peregrine (Eva Green) gather the children in the garden to reset time – their home exists in a time loop, forcing them to relive the same day in 1943 – as a German bomber soars overhead, all scored to the discordant strands of Run Rabbit Run; and plenty more besides to dazzle the eyes.

That inventive flair can’t gloss over a story that’s overstretched and creaking with shabby tropes. There’s an ambitious effort to incorporate a profusion of genres into the script, from dysfunctional family drama and awkward teen romance to holocaust parable and Harry Potter-esque hero’s journey complete with horrifying monsters, led by Samuel L Jackson’s thrillingly camp Mr Barron, who lurk in the shadows outside the children’s magical sanctuary. Yet, this simply over-burdens the story, preventing it from settling on a compelling narrative.

It makes it hard to grow attached to any of the characters. Butterfield works hard to install a semblance of heart and earnestness in Jake, but his struggles to find a ‘tribe’ and navigate a difficult relationship with his father (Chris O’Dowd, expertly playing desperately useless) are not explored in enough depth to truly resonate. Likewise, the orphans are not fleshed out beyond their defining peculiarities. There’s an enticing premise surrounding their frustrations at being forced to relive the same day without growing or experiencing new things that’s poked and prodded but never delved into.

And while Green excels at another alluringly otherworldly character in Miss Peregrine, a gothic Mary Poppins with the piercing eyes of a hawk, she’s little more than a collection of quirks – pipe smoking, obsessive time-keeping – which largely ignores her over-protective, borderline manipulative, hold on the children.

It’s inevitable, then, that as we meander toward a generic climatic battle the action is underwhelmingly restrained and emotionless. We simply aren’t invested enough in these characters to buy into their sense of peril because we have no idea what’s at stake for them or why any of it is really important. Without that, we’re left with a collection of intriguing pictures which lack a captivating tale to bring them to life.