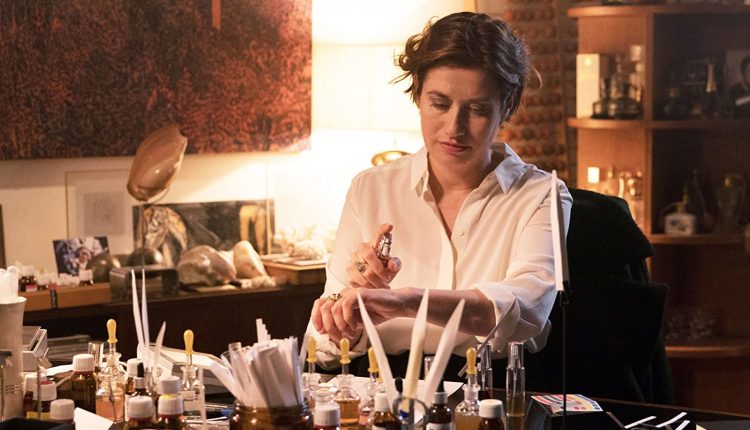 Grégory Magne follows up his feature directorial debut, L’air de rien with the charming Perfumes, a tale of the transformative consequences of a connection formed between two contrasting personalities.

Once the darling of the perfume industry, Anne (Emmanuelle Devos), after temporarily losing her sense of smell, is reduced from creating fragrances to advising companies on camouflaging disagreeable aromas. Autocratic and remote, she employs down at heel Guillaume (Grégory Montel), to act as her chauffeur. The seemingly ill matched duo ultimately find an unexpected affinity with each other which inspires Anne to endeavour to regain her erstwhile professional eminence and Guillaume to repair his fractured personal life.

Magne, who also writes the effectively spare screenplay, eschews many of the normal tropes of movies with an incongruous couple at their core. Anne and Guillaume are not caricatures nor is their teaming overtly comedic. This is a leisurely, but not languid, depiction of the development of a relationship between two lost individuals who, through each other, find purpose. In a telling scene, when asked by Guillaume, Anne admits she does not know whether the waitress whose scent she has just analysed is a blonde or brunette. He forces her to engage with the waitress who she has virtually ignored. The film goes on to show Anne enlisting Guillaume to assist her with her work, seeing potential in him which he does not.

Montel is moving as the increasingly desperate Guillaume, struggling to maintain a relationship with his daughter in the midst of a difficult divorce. Devos is touching, sensitively conveying fragility masked by arrogance. The two blend beautifully with performances which, like the movie, are understated and unsentimental.

Magne has said that he thinks it’s interesting to portray an unexpected friendship as it’s less obvious, less marked and more subtle than an account of a love affair. His film substantiates that, successfully offering a delightful alternative to the all too familiar gentle rom-com.

Perfumes is a captivating story of the redemptive effect of an unlikely alliance. Like a gentle breeze on a hot summer evening, it satisfies and soothes.

Perfumes is showing in cinemas and on Curzon Home Cinema from Friday 21 August.