Personal Shopper’s reputation rightfully precedes it: Not for it’s Indie credentials that stem from having French director Olivier Assayas at the helm; not for it’s ambiguous (misleading?) title and genre-straddling subject matter, but for the performance of Kristen Stewart.

Yep, that Kristen Stewart. The Kristen Stewart whose performance in the Twilight Saga received regular criticism suggesting she regarded unfathomable lust and a severe case of griping as deserving of the same facial expression. This couldn’t be further from the truth, as anyone who has seen American Ultra or Adventureland was already aware (the performance, not the griping). Here, she is mesmerising.

Personal Shopper finds Maureen (Stewart) working as a spiritual medium attempting to make contact with her recently deceased twin brother. Until she discovers undeniable evidence of her brother’s existence in the afterlife, Maureen herself haunts Paris, paying her rent through shopping and running errands for a high profile fashionista. However, when Maureen starts receiving anonymous texts, events take an even darker turn.

Assayas wastes no time in giving the viewer a severe case of the heebie jeebies. Four minutes in and the tension is palpable, as Maureen is hired to ascertain the nature of a spirit on behalf the potential buyer of a ‘haunted’ house. But horror, this hardly is. There is the odd scare jump, yes, but this is a more cerebral affair. Her yearning for more than a “knock once for yes, twice for no” sign of her brother leads her to obsession and ironically, life-threatening danger.

As details of her motivations are skilfully drip-fed, they tenuously connect and eventually cross-over to her day job, where her desire for escapism and longing for identity leads to bloodshed. Maureen’s discovery is both otherworldly and steeped in self-realisation which enables the narrative to weave from supernatural thriller to stalker thriller and back again. 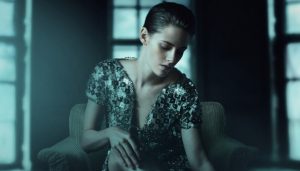 That Stewart has received outstanding plaudits for her performance is hardly surprisingly. In fact, the only unconvincing moment of her performance is where her character buys a bottle of Stella Artois and leaves it untouched as her train is called. How is that relatable? That aside, it’s the minutiae which astounds: the subtle shaking of her fingers as she texts the mystery MMS’er; the tiny trembles of her lips and the individual quirks of her character make her wholly believable, even when she reads the line “it was vomitting ectoplasm”. No mean feat.

However, like a weekend big shop, this should have been cut short. The train journey text convos become laborious, not least because of the lack of punctuation and whilst it’s also a source of intrigue, the morphing tone feels incongruous and not wholly satisfying as a result. With that being said, it’s doubtful you’ve ever seen anything quite like it.

There are touches of genius to behold. Those laborious texts (seriously, who goes much further than ‘Who dis?’) lead to a scene so unnerving that it provoked an involuntary shiver. The mere suggestion of an otherworldly presence is also suggested with the camera following, well, nothing through a hotel lobby. So simple, but so effective.

The question is, should you take time out to see it? One Knock for yes.

Personal Shopper is out on Blu-Ray, DVD and Digital from July 17th.