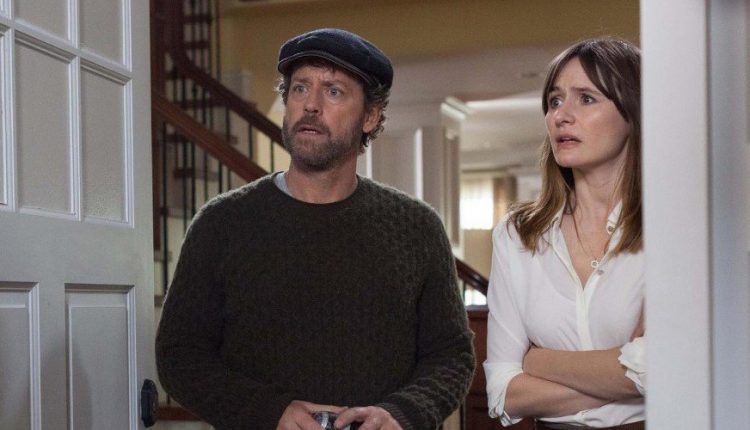 The gumption to concentrate on a dark comedy about the contemplation of suicide is a bold move for any seasoned filmmaker to undertake while hoping that it registers with the intended off-kilter edginess it aims to sardonically tackle. In the case of actor-turned-first time director Greg Kinnear, the Oscar-nominated performer from 1997’s As Good As It Gets calls the shots behind the camera with the well-intentional but clunky comedy-drama Phil. Although ambitious and invitingly cynical on occasion, Kinnear serves up Phil as a flat and aimless dramedy in search of its toothless quirkiness.

Kinnear, a long-time fixture in both his humble beginnings in American television and as a journeyman film actor, ventures into the curious world both on and off screen as a lost soul dentist named Phil whose internal crisis about his fragile life is highlighted by the doomsday curiosity of his depression. This, of course, invites Phil’s weird fascination with suicidal tendencies. Aptly, Kinnear is committed to giving his on-screen alter ego tooth puller a twisty angst worth its off-balanced frivolity. Still, the material feels strained in its existential urgency despite the underlining message of mental illness desperation. It is too bad that Phil awkwardly conveys its philosophical roots in the form of an uneven sitcom trying to feel around for its rudimentary shock value. Thankfully, Kinnear does show some promise for a hopeful vision behind the camera that translates intermittingly throughout this darkened farce.

Screenwriter Steven Mazur (“Liar Liar”, “Heartbreakers”, “Benchwarmers 2: Breaking Balls”) is heavy-handed on the silly-minded jokes and yearns to dig for the film’s charming goofiness but this never manages to level off the serious dramatic overtones that Phil wants to invoke equally. Again, it is an intriguing concept for Kinnear’s earnest direction/acting and Mazur’s meandering script to answer the challenge of an iffy take on topical suicide exploration. Nevertheless, the choppy construction of Phil has this damaged dental wonder about as stimulating as applying novocaine to bleeding gums.

Kinnear’s Phil appears at the end of his emotional rope. Now divorced and estranged from his daughter Molly (Megan Charpentier) the down-and-out dentist considers a flirtation with ending it all. At this point life is not worth living for the professional tooth-tugger. The one glimmer of hope and salvation for Phil to snap out of his fatalistic funk is his encounter with patient Michael (Bradley Whitfield, “Get Out”) whose seemingly good life is put up as a shining example for Phil to emulate. Finally, Phil is liberated by the radiant vibes that Michael signifies and encourages. Can the good dentist taste the inspiration of a man that seems to have it all and then some? Think again, folks.

Courtesy of some strategic stalking that Phil performs toward the prosperous Michael basking in the love and success of family, fortune and minor fame as an author, he shockingly finds out that the “man that had everything” committed suicide with no questions asked. How can this be the case? Why would the blessed Michael do such a drastic thing? Suddenly, Phil’s disillusionment is starting to rear its ugly head once again. So much for Michael’s guide to happy living, right?

Feeling the need to investigate what triggered Michael’s inexplicable suicide Phil decides to conduct his own investigation concerning his late patient’s head-scratching demise. Naturally, if the well-adjusted (before his suicide) and comfortably situated Michael can stuff out his privileged life then what chance does the destitute Phil have to pursue happiness with his chaotic livelihood? Indeed, discovering Michael’s lifeless body was a definite wake up call for the detached dentist. Phil needs to act and act fast before he is overwhelmed by Michael’s hideous exit from life.

The film shifts into mistaken identity/imposter mode when Phil is discovered sleeping on Michael’s grave by his grieving widow Alicia (Emily Mortimer). This embarrassing mishap leads to Phil assuming the false role of Michael’s Greek friend Spiros when confronted by Alicia. Thus, Phil’s made-up on-the-spot identity of Spiros allows the dentist to infiltrate Michael’s personalized world at home where his family, friends and memories are overflowing in reminiscence. Phil as Spiros reasons that he can gain some inside scoop as to what made the late Michael tick…as well as stop ticking.

Predictably, Phil morphs into the convoluted conventions of a sardonic romp where upon Kinnear’s deceptive dentist must duck and dodge any hint of static as he cannot allow Michael’s loved ones, the local authorities or other inquirers from revealing his so-called examination into the dead man’s expiration into the afterlife. Random and pointless plots such as Phil/Spiros faking an expertise at home contractor work or partaking in a celebration at a Greek restaurant as Alicia accompanies him is meant as light-hearted fodder but resonates as lame and lazy-minded. While Phil manages to invade Michael’s office he is fortunate enough to gain clues to the deceased family man’s computer activities including a telling headshot of co-worker Sam (Taylor Schilling). Also, let us not forget that Phil has to stay one step ahead of Detective Welling (Luke Wilson). Basically, the foolish frolicking undermines the dramatic tension in the process. Simply put…Phil cannot sustain its woeful message of suicidal contemplation and masquerade as a wacky vehicle simultaneously either.

Sadly, the audience does not know one way or the other how to interpret the slapdash dramedy Phil because the film wants to aimlessly pander to the opposing sides of levity and heartbreak but fails to instill any genuine ingredients of grief, sorrow or reflection to go along with its weakened naughty streak of wit. Kinnear’s pet project is well-meaning and stacked with a surprisingly decent cast of capable actors. It is too bad that Kinnear plays Phil all to safe while never committing to this flaccid vehicle’s sense of curiosity and/or condemnation.