The very talented Steve Coogan, who costars with the impeccable Judi Dench, also wrote the screenplay (with Jeff Pope) for Stephen Frears’ neat retelling of a touching and thought-provoking true tale from Ireland. This film concerns a lady with this name, Philomena Lee, who got pregnant out of wedlock in the early Fifties when still in her teens. She was turned over to nuns at the Roscrea convent by her parents, who, like many Irish parents of the time in these circumstances, would have nothing further to do with her. After having her baby there, under cruel and unnecessarily painful conditions, she, like others in her plight, was kept as an indentured servant for three years. She and her best friend at the place worked seven days a week in the nuns’ laundry, all work done by hand. The unwed mothers were only allowed contact for an hour a day with their children, who were eventually offered up for adoption. Her best friend’s daughter, Mary, and Philomena’s Anthony, who were inseparable, were taken away together while Philomena watched helplessly from a window upstairs. For more than half a century she has pined for her lost boy. (We see all this reenacted, complete with brutal birthing, darling little boy, mean nuns, and wailing young Philomena watching Anthony taken away — with the little girl from whom he was inseparable, in a very pretty antique English car.)

This film has a ticklish job to do, because it presents tragic and shocking material in a manner that is partly humorous and light. If it succeeds, it’s because of restraint both in the writing and the acting. Coogan, usually a dry comic, plays it straight here, but with ripples of repressed anger that at times rise to the surface. Dench, the imperious “M” of the new James Bond films, plays dumb with such respect and good taste that her Philomena comes to seem a quite complex figure. Yet one can’t help feeling some details have been glossed over. The treasure hunt for the lost child is made to seem easier than it surely can have been. This material relates to Peter Mullen’s 2002 film The Magdalene Sisters, but the events are less harrowing here and the Catholic church of Ireland gets softer treatment on one of its darkest modern chapters. But this script explores the moral and emotional aspects of the young Philomena’s “transgression” in interesting detail. Balance is achieved by having Philomena forgive her earlier tormentors, while Sixsmith does not.

After the revelation by Philomena (Dench) to her daughter Jane (Anna Maxwell Martin), along comes Martin Sixsmith (Coogan), a recently laid off BBC journalist, a Labour Party spin doctor, it’s hinted, who ran afoul of government politics. He muses about doing a book on the Russian revolution, or taking up runing; running wins. At a reception the daughter tells Sixsmith she has a “human interest” story to propose to him. He rebuffs her, wanting to consider himself above “human interest” stories. But he needs to get back to work, and so he has second thoughts. Soon he’s hearing Philomena’s story direct from her. Sixsmith offers the story to a woman news editor he knows. She thinks it’s good juicy stuff, surefire whether it ends sadly or happily, and gives him the go-ahead. 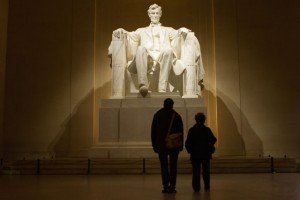 What follows is an odd-couple road movie. It’s a genre at which Coogan excels: see the very funny The Trip. This one follows Philomena and Sixsmith’s search for Anthony, which takes them to Washington, DC and then back to the nuns. Along the way the film, which quietly plays Sixsmith’s anger against Philomena’s simple forgiveness, likewise gently exploits a contrast between the simple and rural Philomena and the snobbish and urban Sixsmith. Philomena’s mind is mush, Sixsmith concludes, from a lifetime of reading the Reader’s Digest and silly romance novels. She is still a devout Catholic. As time goes on she turns out to be not quite as naive as she sounds. Sixsmith too was raised Catholic but has become an atheist.

When they go to see the nuns, the newer, younger ones, easy and friendly on the surface, shield them from any contact with the older ones who were present during Philomena’s time there. They learn nothing about what happened to Anthony. The nuns doubly bar them from information: they say a fire destroyed all records, but they also show Philomena a form, miraculously preserved, showing she signed away all claim to her child all those years ago. A local later tells them the nuns actually burned all their records in a bonfire.

Sixsmith and Philomena hear also from locals that the majority of the Roscrea convent children were given up for adoption to rich Americans, the only people rich enough to afford the £1,000 the nuns charged for the process. Philomena hesitates now not for the only time but agrees to accompany Sixsmith to the US at the newspaper’s expense to track down her son.

The hunt leads the pair to Washington, DC, because Sixsmith has worked there and has many contacts. Soon Sixsmith miraculously brings up the identity of Anthony, his name changed by his adoptive parents to Michael. And this leads to much more information, and finally to revelations we’ll leave to viewers to discover. It turns out the nuns have lied both to Philomena and to her son, who — the thing she most cared about — did care about her and sorely desired to be reunited with her.

This could be considered a dream come true for Coogan, who has performed well in semi-serious roles before, the recent What Maisie Knew, for example, but has rarely had such a big one, opposite a super-A-Lister, and in a film he cowrote that’s received excellent reviews (Metacritic rating: 76).

Philomena, 98 mins., debuted at Venice and was subsequently shown at many other international festivals. It opened in the UK 1 Nov.