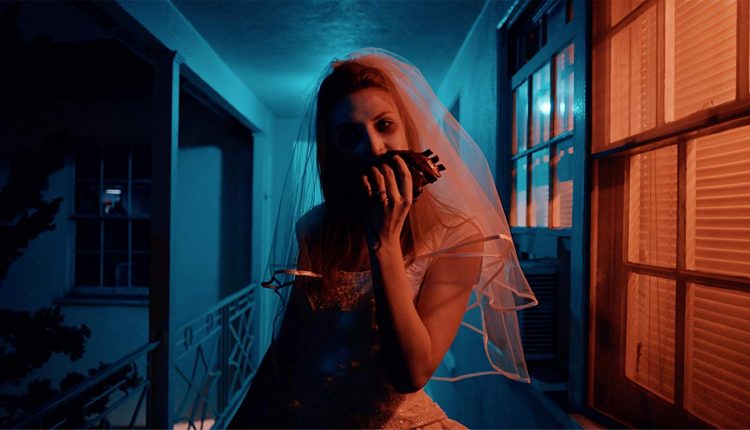 Philophobia: or the Fear of Falling in Love (2019) Film Review

Tyler Cole’s debut feature, out on DVD and VOD Nov 12, is unlike any breakup movie before it.

Philophobia: or the Fear of Falling in Love follows Damien (played by Aaron Burt who also wrote the film), a mildly successful podcaster who’s described as your “typical L.A. guy.” He seems to have everything going for him – he has a nice apartment and a hot girlfriend. Damien and Danielle (Emily Pearse) seem to be a perfect match, and she thinks so, too, as Danielle talks of their great communication and how they can be dorks around each other. But there’s something she doesn’t know about Damien, and something he doesn’t realize himself: He’s scared of commitment, scared of falling in love. It’s Philophobia.

Damien is clearly uncomfortable when Danielle asks him to go out for brunch with her and her mom. He didn’t anticipate, what was once just a casual hookup, to get so serious. And when Danielle says she loves him, it’s the breaking point. He can’t say it back, and she knows she deserves better, so Danielle leaves Damien.

What follows is a typical occurrence in every breakup and movies that depict them: Damien is a couch potato, checking Danielle’s Instagram every five minutes, has no appetite, and would rather cry watching rom coms than leave his apartment. All of this to the annoyance of his high school best friend, Alan (David Lengel), who’s come to visit.

As the film progresses, Damien seems to be in denial of how much the break up actually hurt him. He’s in denial of his true feelings and how much he misses Danielle. This denial begins to spin out of control as he is haunted by ghostly visions of his girlfriend and other zombie-like, bloody mouthed and darkened eyed strangers. Each vision symbolizing his fear of commitment, which he must realize before it gets the best of him.

The film may discuss philophobia, the fear of love, but the film is far from absent of it. And while the ending is predictable, it’s wrapped in a stylish and cool package. Every member of the cast is solid, creating a dynamic reminiscent of those audiences always love in the high budget movies of the genre; but Cole has an incredibly unique vision that many films of the genre lack.

The film’s technical elements – namely Tom Meredith’s handheld camera work, tracing Damien’s every move across an apartment complex that’s engulfed in dimly lit neon and the sound of jungle drums – build within Philophobia an imbued sense of relatability. Coming to terms with our feelings can be alarming, and overwhelming, too.