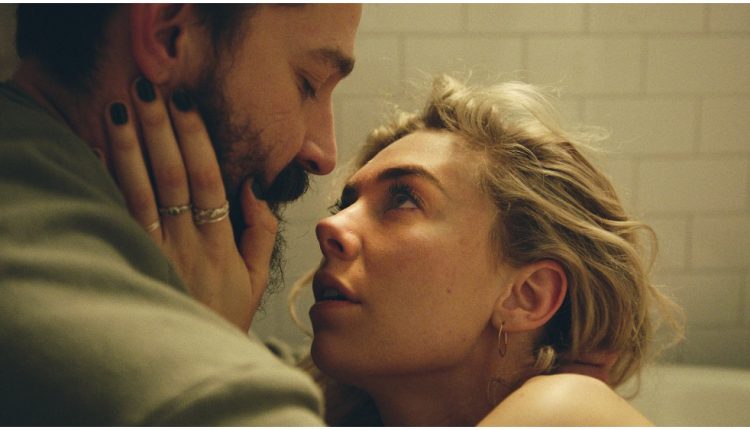 Starring Vanessa Kirby, Shia LeBeouf, and Ellen Burstyn, Pieces of a Woman is the first English-language feature of Hungarian filmmaker Kornéi Mundruczó. The film focuses on a grieving couple who lost their baby during a stressful home birth, which leads to several difficult months.

Barely ten minutes into the film, Mundruczó sets up the stage with an uninterrupted labour scene. Lasting 22 minutes, it captures Martha (Kirby) and Sean (LeBeouf)’s apprehension and pain that reinforce the emotional realism of childbirth. However, the joyful scene takes a dramatic turn for the worst as midwife Eva (Molly Parker) begins to panic. Unable to escape the scene, we have to endure the horror that catalyses the tone of this fraught drama.

Focusing on Martha, the home birth and subsequent loss have become a distant memory. Choosing to refocus on her work and deflect any sympathies, her indifference barely conceals her numbing grief. However, seeing Eva facing counts of negligence chip away at her armour, hinting how deeply the events truly affected her.

However, Martha is not the only one suffering from the loss. Sean becomes frustrated by her inability to find solace in him, causing him to relapse. On the other side, Martha’s overbearing mother Elizabeth (Burstyn) wants her to cave into her anger and demands justice. They are subsequently cast aside to the sidelines of Martha’s emotional barriers, causing friction between the three characters.

Taking his play from the stage to the streets, Mundruczó’s direction highlights the growing strife between the three characters, as well as their own ways of grieving. He also gradually further distances the characters as there is no relief or end to their suffering, leading to the film’s optimistic climax. In addition, Kata Wéber’s sparse dialogue wonderfully allows the actors to deliver expressive performances, with Kirby dominating the film with her stoicism and quietness.

Overall, Pieces of a Woman‘s slow pace and emotional performances drag occasionally but it is hard not to empathise with Kirby’s conflicted Martha.

Pieces of a Woman will be available to stream on Netflix on 7 January 2021.