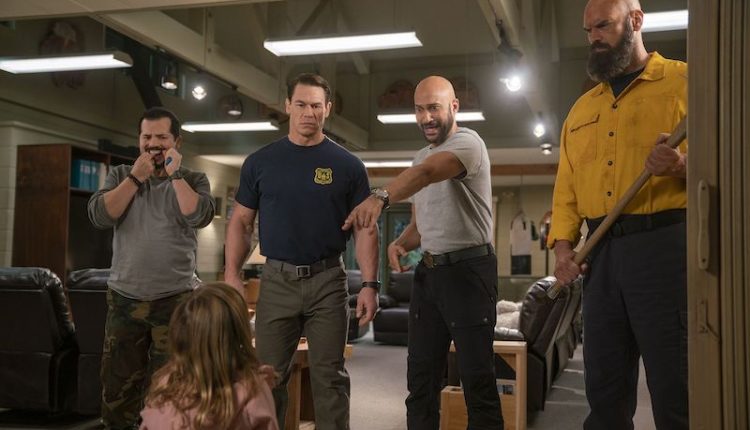 With Dwayne Johnson firmly established as a Hollywood superstar, it is now former WWE wrestler John Cena’s turn to become a film star. After starring in hits such as Trainwreck and Bumblebee, he is now leading the way in the latest feature by Nickelodeon.

Playing with Fire stars Cena as dedicated smokejumper Jake Carson, whose dream job is to become division commander. During an accident, he rescues three children who have become separated from their parents. With fellow smokejumpers Rogers (Keegan-Michael Key), Torres (John Leguizamo) and silent but deadly Axe (Tyler Mane), Carson finds himself taking care of the kids. However, their unexpected duty of care comes with disastrous results.

At first, Playing With Fire comes across as a heartwarming, occasional slapstick comedy. However, it slowly becomes reliant on all-too-familiar clichés and predictability. The unimaginative combination of an emotionally stifled workaholic and three kids only leads to trouble. In addition, its kid-friendly set-pieces seem solely designed to entertain younger viewers that leave older ones in a state of boredom.

While Andy Fickman‘s direction is creative in places, Dan Ewen and Matt Lieberman’s awkward screenplay fails in the comedic stakes. Even jokes such as Rogers’ creepy overattachment to Carson and the kids’ chaotic nature are formulaic enough to evoke a groan or two.

The casting is also mixed as Cena presents himself as human Action-Man, who gradually breaks out from stifled and militant to a somewhat likeable hero. Between the one-dimensional Keys to the underused Leguizamo and Judy Greer, the supporting cast don’t fare much better.

Overall, Playing with Fire is unnecessary family entertainment, which is sure to suffer during the festive season.

Playing With Fire is out in UK cinemas on Boxing Day.