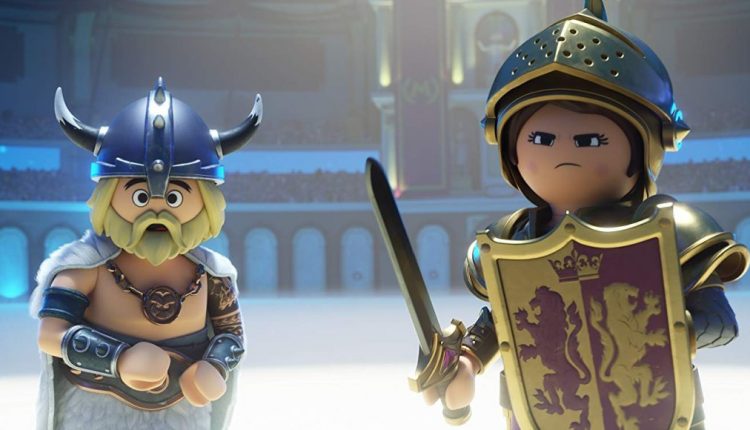 The onslaught of the popular The Lego Movie film series was both a blessing and a curse. The blessing was rooted in the remarkable reaction to the surprising genre of marketing a highly successful childhood toy and turning it into box office gold that glittered in the imaginations of youngsters and oldsters alike. As for the curse…well, the inevitable inferior knockoffs that desperately tried to piggyback off the effortless charm of the Lego phenomenon. Thus, the synthetic and strained kiddie clunker Playmobil: The Movie looks to claim the latter sentiment as a cursed copycat looking to toy around with the credible clout its preferred plastic playthings in the aforementioned Lego universe had already established with its fun-loving, energetic vision.

This is not to penalize Playmobil: The Movie for its bid to share in the toy-themed sweepstakes. After all, it is fair game as Hollywood will always try and capitalize on the popping trends that readily resonate with the movie-going public. Unfortunately, director Lino DiSalvo assembles a flat and familiar youth-oriented adventure that meanders without incorporating anything distinctively spunky or inventive to squash the expected Lego comparisons. Pointless and aimlessly fidgety, Playmobil: The Movie is nothing more than paper-thin plastic pawns posing as a mischievous mashup for the indiscriminate kiddie crowd.

It is a crying shame that Playmobil: The Movie blatantly looks to swipe at the Lego screen appeal yet falters in encompassing the same kind of wit, wackiness, and wonderment that was the ingredient of its boisterous blueprint. DiSalvo, a one-time Disney animator, should have some sense of playful impishness when overseeing his plastic protagonists and their giddy-minded exploits. However, the cheekiness in the movie feels labored in its plotting as DiSalvo shifts from one dragged sequence to another without so much infusing anything that registers with bounce. Despite the misplaced musical numbers, a tepid nod to the essence of family, and the random set designs showcased at will Playmobil: The Movie is a featured playset that lazily coasts on the novelty of its gimmick–talking peg pieces that need to retreat to the nearest toy-box and rethink its numbing reason for existing.

The premise tells the tale of a brother-sister duo separated by the whims of the younger sibling opting to explore the magical region of Playmobil while older sister sets off to bring him back home. Hence, Charlie (Gabriel Bateman) disappears into the unknown as big sis Marla (Anya Taylor-Joy) begins her mission to search for her missing brother. Soon, Marla’s travels to fetch Charlie will prove to be a surreal task as she encounters all sorts of off-kilter personalities. With their deceased parents no longer around to guide their offspring Marla and Charlie are lost in the whimsical world of Playmobil. The quest for exploration for the brother/sister tandem is both daunting and strangely delightful.

It is important to note that uptight Marla, the constant keeper in charge of Charlie’s welfare, has always had an aversion to traveling and seeing the whole scope beyond her settled confines. Perhaps keeping an eye on Charlie as his primary caretaker has buried any curiosity about the outside world as the cynical Marla just accepted her limited existence? Now, retrieving Charlie allows her to become spirited about her travels as the journey certainly keeps the young lass on her toes.

Eventually, Marla will run across some oddballs that make up the wacky residents in Playmobil. Losing track of Charlie to a nearby toy convention (where he will morph into a Playmobil Viking) is the beginning of her colorful trek through the territory. She rubs shoulders with a slew of Vikings, pirates, soldiers, prehistoric critters–all while enlisting the help of some sidekicks including food truck driver Del (actor/comedian Jim Gaffigan). Marla must navigate this cartoonish landscape and Del certainly is the key to her promise to do so.

In the meanwhile, poor Charlie–the newly formed Viking–is in the clutches of the evil Emperor Maximus (former American Idol sensation Adam Lambert) whose goal is to round up warriors to fight for his perverse amusement. Additionally, Marla is aided by cocky secret agent Rex Dasher (former Harry Potter portrayer Daniel Radcliffe) as she looks to infiltrate yet another peculiar Playmobil kingdom.

Although hoping to mix sentimentality with the trappings of a kid-friendly slapdash, Playmobil: The Movie lingers on as its clumsy clashing of musical medleys and Romper Room-ish mockery never quite gels accordingly. Unlike the often-mentioned Lego (both toy and movies), the Playmobil factor just does not have the interest or intrigue already reserved for the big screen toy treats that made their mark previously. Whereas The Lego Movie film franchise captured the nostalgic nuttiness of its toy-making brand Playmobil is just a wannabe substitute devoid of any genuine spry revelation. The voiceover work is fine and singers Lambert and Meghan Trainor inject some musical whimsy into the flaccid fold. Otherwise, the comical cliches and fuzzy forethought make for plastic-coated pap.