Stop me if you think you’ve heard this one before. In Possum, Phillip (Sean Harris) struggles to destroy a puppet that keeps coming back no matter how he destroys it. In concept Possum sounds like a familiar scary story, but I can assure you that this will be like unlike anything you’ve ever seen.

Sure, the film borrows from the scariest side of David Lynch, where you’ll wonder if the film would have been even more terrifying if it were in black and white a la Eraserhead. It will also remind you of Jennifer Kent’s modern masterpiece The Babadook with its terrifying rhyme about the birth and life of the titled creature Possum. Harris’ narration is the stuff of nightmares and features skin-crawling lines like, “See his nasty legs and tongue, when he wakens watch him run…” Eeek. If the on-screen imagery doesn’t haunt your waking hours, perhaps the disquieting rhyme will. 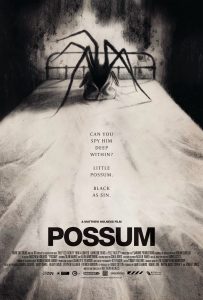 There is a thread of the uncanny that runs throughout the film. The grimy design of Phillip and his “uncle” Morris’ (Alun Armstrong) home is unsettling and icky, grounding the film in an unappealing reality where puppets have a life of their own and real monsters are closer than you think. The film is set against the backdrop of a quiet Norfolk landscape, which is effortlessly eerie with its desolation and dreary weather. Hooray for Britain’s grey skies, creating the perfect setting for this horrifying story.

Putting aside the physical horror of the gangling spider-like thing, there is an even more troubling – is that possible? – thread of thematic terror running through Possum like a disease. Buried within Philip’s fear of the possum is a psychological terror that is teased in his inability to open a singular door in Morris’ home – “Going in?” Morris asks, before Phillip worriedly shakes his head and walks away with that damn creepy brown bag in tow. Soon you’ll realise that the possum is a manifestation of a fear Phillip has been carrying for far longer. Further teases are shown on the television and in the unclear relationship of Morris and Philip; who is he? Rest assured that these questions will be answered in Possum’s unforgettable, dark climax.

Possum feels like an extended short or a silent movie, with its lack of dialogue and carefully controlled, streamlined story-line. It’s hard to describe what the film’s about, because it’s more like an extended feeling than a film. It’s all about the atmosphere and a controlled build-up of dread, where you think it can’t get worse before it definitely does. It’s all the more terrifying for its refusal to commit to the expected constraints of narrative; where horror films are driven by plot points and dialogue, offering jump scares followed by humour to remind us it’s all just a story. Possum is unusual and unpredictable, bold and bizarre, confident in its commitment to scare unexpectedly and consistently. You’ll not laugh once and that’s a refreshing, welcome feeling to have when you’re watching a scary movie.