by Stephen Mayne
in Film Review

Adapting The Little Prince, Antoine de Saint-Exupéry’s incredibly popular story first published in 1943, does not come without risk. Deciding to then launch it at the Cannes Film Festival in France, the home country of the beloved novella, could be seen as foolhardy. For the most part, Mark Osborne and his team pull it off, capturing the vivid imagery of the source material in a sweeping blend of stop-motion and computer-generated animation. It’s the content that slips them up, the deep, complex layers of the original flattened out for an easier tale of imagination, lost childhood and love.

In the original, an Aviator crashed in the desert comes across the Little Prince descended down from the small asteroid he lives on. The two then set out across the sand while the Prince fills him in on details from his world, including the single Rose on his tiny home that he loves more than anything , and the Fox he’s met and tamed on earth. This strand remains, rendered beautifully in stop-motion animation.

Somewhat unnecessarily, an additional computer-generated narrative has been added by screenwriters Irena Brignull and Bob Persichetti, taking place in a dull, uniform grown-up world where children are prepped to be “essential” from a very early age. Desperate to get her daughter, the Little Girl (Mackenzie Foy), into the top school in the area, her Mother (Rachel McAdams) moves them into the catchment area via the only house they can afford. It’s cheap because it’s next to a crazy, ramshackle property inhabited by the Aviator (Jeff Bridges). Shunned by the neighbours, he’s keen to one day re-start his plane and go off in search of the Prince he met in the desert. Bonding with the Girl after firing a propeller through her house, they set out to find the characters from the story he so lovingly narrates. 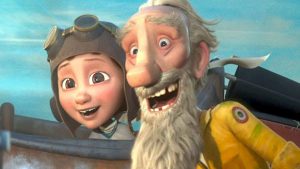 The Little Prince spares no expense visually. The stop-motion elements are stunning, cast in clearly defined colours and beautifully textured. The way clothes ripple and foxes run is deeply impressive. The computer-generated section doesn’t have quite the same impact. In its attempt to depict a bland world, it ends up too bland itself. Dull grids of grey housing and boxy cars mix uneasily with the wild colour palette going on at the Aviator’s house.

The simplified story also hits softer than it should. There’s plenty of nice touches as the Girl tries to return the stars to the sky and reunite the Prince with his rose (Marion Cotillard), but the subtle critique of social hierarchy and a world focussed on the wrong values falls away. Ignoring these, Osborne aims for sentimental emotion, and he hits the spot. The race to save a now ailing Aviator and return the Prince to his Rose is a breathless, tear-jerking adventure enhanced further by an excellent voice cast that includes James Franco, Benicio Del Toro, Albert Brooks, Paul Giamatti, Paul Rudd and Ricky Gervais.

The Little Prince is delightful without quite managing to be what it should. It’s a partial adaptation, taking the heart and leaving the soul of the original, capturing the light and ignoring the dark. The end result flares in patches, just bright enough to carry the day.