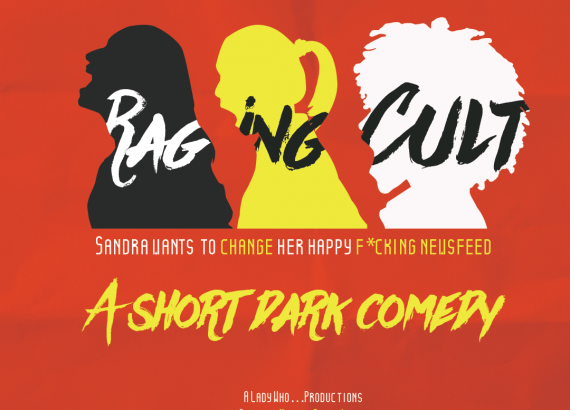 If a tree falls in the forest and no one is around to here it, does it make a sound?

So goes the philosophical question that first appeared around the 1700s.

Jump forward a few hundred years and we may find ourselves pondering questions such as: If I didn’t Instagram my meal, did I actually eat anything? Or maybe even, if my post didn’t get 10000 likes, am I worth anything to anyone?

Welcome to the 21st century, a place of hashtags and viral. A place where if you aren’t trending, you  might as well be wearing a scarlet letter, or perhaps just the shame of a non-verified twitter account.

Into such a world, we find ourselves thrust, in the capable hands of writer/director/producer/actor Meagan Adele Lopez, whose short film Raging Cult explores both the nature of a life lived online, and a life not lived at all.

Sandra (Lopez) is an agoraphobe, who lives her life vicariously through her social media accounts. Baffled daily by the abundance of positivity and smiling faced ‘living my best life’ of it all, Sandra is becoming increasingly frustrated, locked away in her flat, with only a broadband and her best friend Molly (Mollie Keane) for company. Sandra doesn’t get it: why would all these women be so happy? Why aren’t they as miserable as her? Why the need to project a false image of contentment when surely they must be as angry and frustrated as she is?

“People pretend like the online world isn’t real,” she says, “but to me, it’s everything.”

And so, Sandra does what any normal, shut in young woman would do: she decides to start an online cult, a revolution in rage as it were, with disciples from all walks of life ready to unload their frustrations onto a world that has turned its back on reality.

But like all great human comedy, it doesn’t quite work out that way.

Lopez’s screenplay is an exploration of one of modern life’s most rampant intricacies. Placing a clearly unhappy woman as its centre, the film dares to look deeper into what makes us truly happy, and, more importantly, what gets the blood up.

Sandra’s idea is not without validity. The online world is a lie and she knows it, her cult a logical response, as she sees it, in order to give women of all types an outlet and voice, a place to unburden their anger, and show the world that other side of femininity rarely embraced, particularly in an online context.

That the film manages to take on such weighty subject matter (desperately relevant to the current cultural climate) while delivering on laughs, is nothing short of miraculous, proof that given larger budgets and a longer running time, Lopez is a film maker to be reckoned with.

The structure is airtight, delivering character, nuance and a powerful message, while maintaining a balance of tone that leaves you just on the edge of your seat. The plot is ambiguous in its intent, the humour and the drama always daring to overpower each other, in a constant tug of war, and indeed, it feels at times like the film could turn on you at any minute.

The performances are one of the films many gifts. Keane subverts the quirky best friend cliché, giving Molly the sense of a life removed from Sandra’s, which, of course, it is, given Sandra’s mental health and inability to function outside of her own environment. Unlike a multitude of rom-com supporting characters, Sandra needs Molly more than Molly needs her. A refreshing change of pace.

Lopez, meanwhile, all but steals the show with her portrayal of Sandra, a true force of nature, albeit one that locks herself away from many of life’s experiences. Like a twister trapped in a jar, she bounces off the walls, all wired energy and anger, but played with just the right amount of good humour and naivety to make her both likable and compelling. Misguided as her plans may be, you root for her, even empathise with her plight. And for an agoraphobe, she has an immaculate sense of style, truly a cat most comfortable in her own habitat.

Stylistically, a great deal of the character flourish comes from such detail. Not just the costumes, but the locations (with art direction by Helen Cusack O’Keeffe) and the cinematography (by Jackie Teboul.) One might expect Sandra to live in some sort of hole, but instead, her flat is filled with colour and warmth, the blues and reds dominating, depending on her mood at any given time. The flat is a character in itself, the other best friend in Sandra’s life.

As a director, Lopez maintains a firm grasp of her story, and a visual flourish that incorporates both a documentary style (particularly in the hilarious, awkward video interviews Sandra and Molly conduct with prospective cult members) and an almost surreal observational humour.

And yet, she isn’t laughing at these characters, but with them. What Sandra is interested in is showing rage to be beautiful, a positive. Not something to be shied away from, but rather something to be celebrated, appreciated and loved.

She wants to show every aspect of the female experience that has yet to be sold as desirable.

And the liberation she provides these women is where her redemption lies. Indeed, not just her redemption, but the redemption of a generation of women who are now walking through the MeToo/TimesUp era, a time of significant change both politically, sexually and culturally. A time of fear and confusion. But most importantly, a time of anger.

It’s a powerful message, buried deep within this well-crafted comedy. Lopez is a film maker who wants to entertain you. But she is also making a contribution to a larger conversation.

A conversation that is long overdue.

Raging Cult is currently screening at festivals. For more information, head to the website.