When The Raid came out in 2012, the word ‘overwhelming’ seemed like an understatement.  Seeing such a full-on action film made by a relatively unknown guy in Wales was a surprise – but a welcome one, as it became one of the best martial art films to come out in years.  So, what can be expected from its sequel two years later?

The Raid 2 immediately follows on from the events in The Raid, where rookie cop Rama (Iwo Uwais) practically fought his way through a tower block to take down a crime lord.  Despite the risk to his family’s safety, not to mention his own, he is immediately recruited to a special task force to take down other corrupt police officers by going undercover within the criminal underworld. 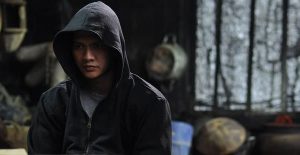 One of the great things about The Raid was the feeling of claustrophobia and need of good triumphing against the odds.  Having the film set in a tower block with everyone out for your blood is simple but effective, generating enough sweaty-palm tension to keep you gripped from beginning to end.  However, in its slightly overlong 150 minute running time, the danger level in The Raid 2 dwindles quite dramatically and due to the evident lack of tension, the story and dialogue suffers as a result.  In addition to this, the number of new extra characters makes it difficult to keep track of who is working for whom and certain scenes end up being almost excessive.  Uwais has more time as the main star, compared to a team member-turned-hero in the first film, as does Yayan Ruhian (The Raid’s Mad Dog, who appears in The Raid 2 in a supporting role) so they have a chance to be dramatic but unfortunately, none of these scenes really compare to when they are kicking someone’s ass.

However, the beauty of this being a sequel is the opportunity for Gareth Evans, as well as stars and co-choreographers Uwais and Ruhian, to improve on the impressive action sequences.  From car fight chases to a series of adrenaline-charged fights that is reminiscent of Game of Death, the results are nothing short of mental.  There’s blood, broken bones and relentless action, cranked up to a level that surpasses the original by a significant margin.  Even the short fights featuring new characters ‘Baseball Bat Man’ and the soon-to-be legendary ‘Hammer Girl’ (Very Tri Yulisman and Julie Estelle respectively) are finely choreographed and Evans has a chance to deliver the action film that he wanted to make since completing his 2009 film Merantau. 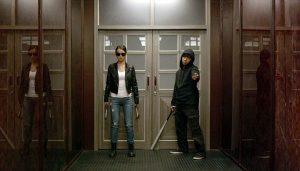 Despite it lacking in certain elements, The Raid 2 successfully captures the exhilaration and unadulterated entertainment that comes from a truly great martial arts film.  Definitely one of the top films of 2014 so far  – bring on The Raid 3.

The Raid 2 is out in UK cinemas on Friday 11th April.