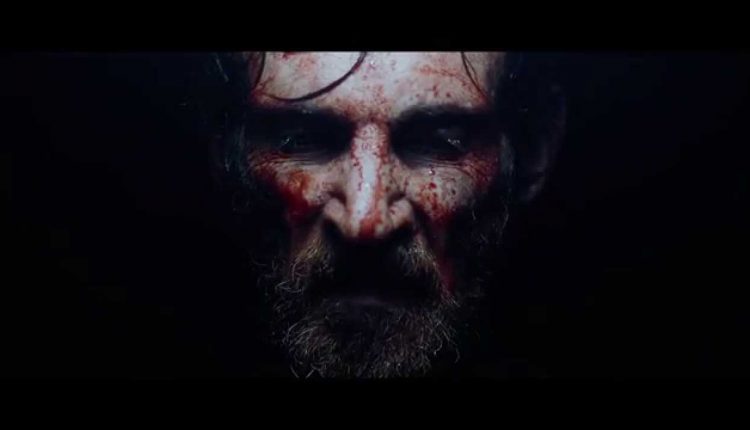 The Global Financial Crisis and subsequent recession and descent into monetary despondency have provided artists with plenty of food for bleak thought. J.P. Davidson uses the idea of fiscal ruin as the starting block for his psychological horror God’s Acre, a minimalist chiller that plays on the idea of isolation and bereavement in a grim urban setting.

Property developer Malcolm (Matthew Jure) is looking to shift the last of his property, and shift it quickly in order to pay off his debts. Unluckily for him, the one remaining house in his portfolio is in a real state of disrepair, requiring Malcolm to move in as he carries out some hasty renovation. While carrying out restorations he notices a false wall in one of the rooms and proceeds to investigate its addition to the premises by smashing it to pieces with a claw hammer. Behind the wall Malcolm finds detritus – clothes, photographs, toys – seemingly belonging to the previous tenants and he quickly begins to believe some terrible fate has befallen them.

For budgetary reasons or other, Davidson has confined most of the drama to the scuzzy interior of a single (presumably London) house. The sense of confinement generated by such an action works well in the film’s favour, hammering home a kind of feeling of cheerlessness as Malcolm continually inhabits the same space. Jure’s Malcolm is a hopeless drunk too. It’s a nicely bedraggled performance that feels desperate and doomed to failure.

Davidson has managed to do a few of the simple things well too. The film’s aesthetic, sporting a washed-out, grey palette lends a gloomy air and he’s forgone the bells, whistles and shallow shocks of much more mainstream horror, content to let the feeling of claustrophobia slowly grow.

Christopher Campbell’s eerie minimalist score sits nicely in the background, never making its presence too heavily felt or outstaying its welcome. Its simple but effective ability to instil a sense of dread put me in mind of the more oppressive work of video game composer Akira Yamaoka, which can be no bad thing.

Davidson builds to a pay-off that is telegraphed pretty early on and will come as little enough surprise to most viewers, but the journey itself is fraught with enough tension and carried off with panache by those involved.