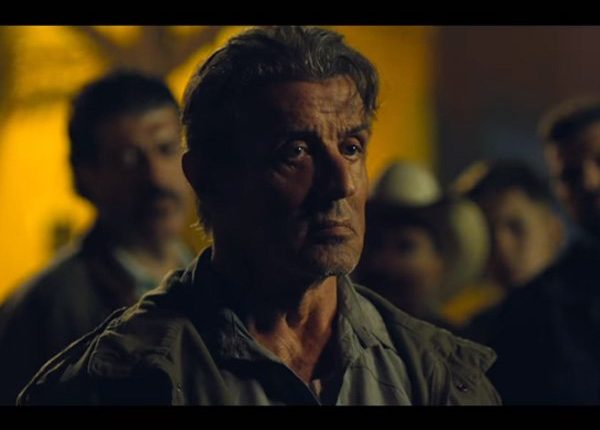 Certainly no one can accuse veteran action star Sylvester Stallone of not revisiting an iconic cinematic character and taking advantage of his big screen impact throughout the course of an action-packed filmmaking career. Stallone struck Tinseltown gold when donning his legendary boxing shorts for his Oscar-nominated turn as Rocky Balboa in the Rocky film series. And then another kind of fighter emerged for Sly that managed to capture the moviegoers on an entirely different scale of testosterone in the early eighties–Stallone as Green Beret killing machine John Rambo in the First Blood film franchise.

Well, the muscled menace is back for a supposed final curtain call as Stallone’s John Rambo looks to wreak further havoc in the numbing escapist action thriller Rambo: Last Blood. Indeed, this pump and pain-driven spectacle meant to draw some shock value blood is in serious need of a toxic transfusion. Although Stallone looks to breathe some life into the hostile exploits of his destructive gun-toting vet with an itchy trigger finger for vengeance, Rambo: First Blood now reduces this soldier of misfortune to engage in aimless raucousness for the sake of excitable nostalgia. Sadly, it is not about the wheelhouse of angst-ridden torture that once bombarded Rambo’s on-screen tattered psyche. Instead, it is about the wheelchair that Stallone’s John Rambo should be resting in for the preservation of what was previously a contemplative, gritty character-driven anomaly of the war.

What made the original First Blood film back in the Reagan-era heyday so unique and telling was its chiseled protagonist lashing out at the world as a decorated casualty of the unspeakable atrocities of the war’s magnitude. Rambo was the revved-up poster boy for the physical and psychological ugliness of the war effort’s toll. Rambo did not glorify the aspects of killing on a whim but audiences could appreciate the underlying instincts and intensity for blood-thirsty hedonism. Truthfully, First Blood was a solid war actioner that had many dimensions to its anti-hero’s personalized madness. Unfortunately, one cannot make the same claim for the chaotic and clunky Rambo: Last Blood. Whereas First Blood was armed with consciousness and conviction, Last Blood is tainted with cliched corrosion.

Nowadays, we find Vietnam vet John Rambo settling down at his family ranch in Arizona. Rambo is a family man of sorts as he is surrounded by his surrogate daughter Gabriela (Yvette Monreal) that he has assisted in raising when she was a little girl and housekeeper Maria (Adriana Barraza). So all is well with the buff cowboy as he proudly rides his horse and oversees his stock of farm animals. For once, John Rambo seems at peace…finally! However, Rambo will face a parental challenge that he is not quite prepared for courtesy of Gabriela’s understandable curiosity about her Mexican biological father. Yikes!

Conveniently, Gabriela discovers that her father is alive in Mexico and wants to make arrangements to meet him. Rambo, of course, is concerned because he knows what a dastardly daddy Gabriela’s old man really is beneath the surface. Naturally, Rambo expresses his dismay for Gabriela to mingle with her poisonous papa. Predictably, Gabriela–in an act of softened rebellion–does not heed Rambo’s warning and heads south of the border. Soon, Gabriela is abducted by the notorious Martinez Brothers (Oscar Jaenada and Sergio Peris-Mancheta). Poor Gabriela is eventually sold into a sex trafficking ring. This gives Rambo the excuse to go rogue and rescue the imperiled Gabriela. Lord have mercy on the sorry souls that interfered with Rambo’s precious little girl.

While on the track of the riff raff that snatched Gabriela for their skin game trading Rambo is partnered with a lovely journalist named Carmen (Paz Vega in a thankless role) whose sister happened to have endured the same kind of sexual indignities as Gabriela. It goes without saying that Rambo is unhinged and willing to obliterate everyone and everything that stands in his way. The amped up violence is off the charts. Rambo goes through the morbid motions of sparing no one as he is triggered big time. The moral of the story: it is not nice to tick off one John Rambo.

Admittedly, Rambo: Last Blood is a rollicking wrecking ball of a mess. Director/co-writer Adrian Grunberg (“Get the Gringo”) and star/co-writer Stallone collaborate on this thud of a final mission of mayhem. The banal and boisterous proclivities of Last Blood is baseless in its blood-thirsty pretentions. The film acts as if it is the second coming of Taken on steroids. The colorful bloodbath and the Mexican “brown baddies” aside, Last Blood pours it on thick but is thin in its purpose to resolve the hidden monster that had made an edgy John Rambo a societal slaughterhouse super-soldier. Sure, Rambo fanatics will rejoice at the carnage after the dust clears. As for others, the sharpness of Rambo’s trademark knife just does not cut it anymore in what amounts to be the film series’ swan song of an uneven and unnecessary bloated exit.