A muddled romance from the other Kurosawa

Real is Kiyoshi Kurosawa’s first feature film since Tokyo Sonata( (2008). And it’s beginning to seem like a very long time since the director’s distinctive yet wholly Japanese horror films, The Cure (1997) and Pulse (2001). Kurosawa’s 2012 TV mini-series Penance (SFIFF ’13) was finely crafted and highly watchable but somehow the original distinctiveness and promise were lacking; and for that matter despite its garnering perhaps justified praise in the West, Tokyo Sonata (NYFF ’08) wasn’t an altogether original idea. This one isn’t either, and it presents more wan material. Real delves into a Matrix-like connecting up of separate consciousnesses, only this time the consciousnesses are just two. They belong to young lovers who live in a nice apartment in Tokyo. One is in a coma, while the other tries to help by participating in a fancy neurological treatment method known as “sensing.” So we get a romance, with fantasy and science fiction. 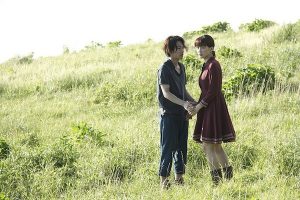 What could be more Japanese than the circumstances: a manga artist obsessed with work and unable to cope with the world outside the drawings, suicidal and obsessed with childhood? Kurosawa achieves a delicate look, using delicate-looking actors. The result is a film that’s nicely crafted, with some good monster special effects, moirée links, and manga fantasy-corpses; but it’s repetitious and overlong, taking forever to arrive at a long-obvious finale, flipping back and forth too often along the way. To Matrix and Inception are added Freudianism and a touch of Jurassic Park which really is more a reference to Japanese Fifties monster movies, which Kurosawa gets to do over with state-of-the-art CGI, but limp results. And to top it off this premise was already more intensely dealt with very recently in Lithuanian Kristina Buozyte’s Vanishing Waves. 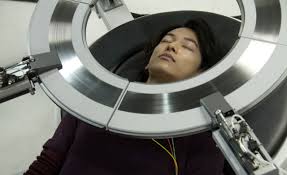 A young couple, Koichi (Takeru Satô) and Atsumi (Haruka Ayase) were childhood friends, now young adult lovers, who pledge to be together forever. One, now, is in a hospital in a coma after a failed suicide attempt. The other submits to the “sensing” process whereby the two’s brains are connected, in hopes of finding why the act was done and restoring normal consciousness. “Real” is a giveaway title that warns you: you’re not supposed to know what is and isn’t. Who is the manga artist, and who is the neurologist? Who’s in the coma, and who’s delving into the unconscious lover’s mind? Is any of this happening? “You can be in my dream if I can be in yours” Bob Dylan said. But who’s dreaming? 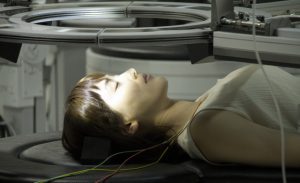 Whatever the answers to these questions, you are in for a lot of visits to the couple’s apartment and a lot of trips to an island where they both lived for a few years as kids. You’re going to get a lot of glimpses of a little boy drenched with water. You’re going to go hunting repeatedly for a childish sketch of a Plesiosaur that was unusually well executed. This for some reason might get the manga artist’s confidence back. As Koichi, Takero Satoh is a pretty male ephebe type always dressed in loose cut-off paints, who draws more attention and gets more screen time than Haruka Ayase as Atsuko, the girl, and has elaborate hair that is dramatically askew in key scenes. After a while his hair began to seem more interesting than most of the rest of the movie.

It seems “sensing” leaves you with “side effects,” like LSD. You may see things when returned to normal consciousness. And so the line between “real” and “unreal” begins to become blurred. The trouble is that Kurosawa has eventually blurred too many of his lines, to the point of not caring. And he has substituted a fairyland supernaturalism for the truly terrifying spookiness of his horror films, and chooses to end with a soppy romanticism. In short he has chosen treacle as the alternative to scaring the hell out of us. This is definitely a misstep by Kiyoshi Kurosawa, who seems to have lost his sense of feature film timing and structure after working on the lengthy, multi-section Penance. 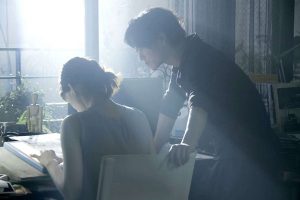 Real/Riaru: Kanzen naru kubinagaryû no hi opened in Japan June 2013, and was shown at Locarno and Toronto. Mike D’Angelo relayed the reaction of some when he tweeted: “I can’t top this. RT @Astrostic: Real: INEPTION.” (For further unfavourable fest reactions see Kayframe.) There really is a clumsiness about Kurosawa’s over-and-overing of Coma stories, Inception, and Matrix. Screened as part of the New York Film Festival at Lincoln Center for this review, to which it was a last minute addition, perhaps out of loyalty to the director as a NYFF alumnus.