How can the children be the future if there aren’t any of them? The demographic changes shaking much of the world are felt particularly acutely in China, a country in the process of packing the west’s centuries of industrialisation into mere decades. An ageing population is as much a familial poser as it is economic though. In Red Amnesia (Chuang ru she), a film of two distinct halves, Wang Xiaoshuai ponders these problems with acute awareness before abandoning course for safer shores.

It’s a shame Deng’s (Lü Zhong) struggle to find a place in life ends up relegated to the undercard. Living alone with only her husband’s picture for company, she tries to find ways to enter her two sons’ lives only to be rebuffed. There’s no malice on their part neither is there space for her. She’s simply a woman out of time. In a devastatingly observed scene, she finds herself permanently in the way as her daughter-in-law cooks the evening meal, left to shout redundant advice from the doorway. Once upon a time she’d have been running that show. Now she can’t even buy a ticket to watch.

Lü’s expressive face is used well. Her irrational fear of criminals leaves her casting cautiously around in public, torn between suspicion and fear. Shock flares briefly when a TV wakes her at the dead of night. Set determination marks efforts to adjust a complicated electrical set up that involves precariously balancing on a chair. Care is taken to flesh out her sons’ Jun (Feng Yuanzheng) and Bing (Qin Hao) too. Both love her; they just can’t accommodate her. Jun has a well-meaning wife who can’t help but clash with his mother, Bing a lifestyle choice that makes no sense to her. 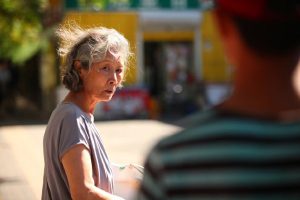 For a while, Red Amnesia follows this path. It’s astute, intelligent filmmaking that addresses big questions without grandiosity. Then the tide turns, dragging the narrative down a safely predictable path. Nuisance calls reopen long buried crimes fracturing Deng’s remaining reserve. Soon, fearing for her sanity, she’s on a journey to pay penance for past sins.

Wang handles the technical requirements of this new direction comfortably. A double chase scene crackles with desperation while a detour into psychological horror is distractingly effective. None of this hides the plodding conventionality that’s taken over. The final resolution is telegraphed so far in advance that interest in the intervening drama wains quickly. Her immediate family also recedes from view, no longer serving a purpose in Wang’s’s brave new world. When the end finally arrives, it does so with a weary shuffle.

For a while there, Red Amnesia threatened to be exceptional. Then Wang blinked and the moment was lost. What’s left is not a bad film. Just a waste.

Starry Eyes: An Interview with Kevin Kolsch and Dennis Widmyer