From Paul Verhoeven (who has given us such varied delights as Basic Instinct, Starship Troopers, Total Recall and, yes I will include it here, Showgirls) comes this late 80s action classic that I’m not ashamed to openly embrace with open arms.

Peter Weller plays brave Officer Murphy, reassigned to a precinct that has the misfortune to be dealing with some of the baddest of the baddies around (including the great Ray Wise in a small, enjoyable role, and Kurtwood Smith as the loopy Clarence Boddicker). He and his partner, Officer Lewis (played by Nancy Allen), decide to arrest these bad guys when they spot their vehicle passing them by, but all does not go according to plan. Cut to . . . . . . Officer Murphy in a majorly bad, physically traumatised way. His spirit is strong, but his body can only take so much. Until the superficially benevolent company OCP provides him with a steel-plated makeover and before you can say “Metal Mickey, grab your gun” Murphy has been transformed into Robocop, the cop of the future. And he’s going to clean up the town.

Robocop is, like many of Verhoeven’s other movies, not for the easily offended. The first major death scene occurs just over ten minutes into the movie and is a bloody, harsh bit of business, quickly letting viewers know that they’re in for. But things are about to get much more brutal. Taking potshots at plenty of targets, from corporate fat cats to far-from-impartial media companies (and how apt is that during the current climate of media mistrust ongoing in the USA?), it does so with the requisite blood, guts and firepower. In fact, the violence and bloodshed on display here is even more brutal than material found in many horror movies of the era. It’s unflinching, sadistic and strangely mesmerising. 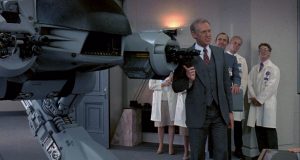 Verhoeven draws you in with a mixture of great dialogue, superb acting (Weller deserves credit for his robotic moves, Allen is okay, Kurtwood Smith is an absolute hoot and then you have the likes of Miguel Ferrer and Ronny Cox handling some of the larger supporting roles) and adrenaline-pumping action. There’s also a wonderful, bombastic score by Basil Poledouris. Verhoeven has a knack of taking numerous, unsubtle elements and putting them together in such a way that they somehow knit together and create an end product that’s much smarter than the sum of its parts. 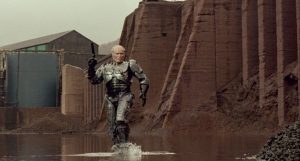 The effects vary from the magnificent to the slightly shoddy but that’s really just down to what the team could work with at the time, and it’s still a movie set in a fantastically realised near-future, with the creations (by Rob Bottin, William Sandell and all involved) emanating a surprising amount of warmth, considering that they’re all guns and metal. Ed-209 may look like the model it clearly is at times, but it’s one of the most endearing, crazy killing machines I’ve ever watched in a movie (this is also helped by the sound design).

Sure, this is the epitome of an ’80s macho movie but it also adds so much, in so many sly ways, for those who look a little deeper to appreciate, that it deserves to retain its status as something quite special.