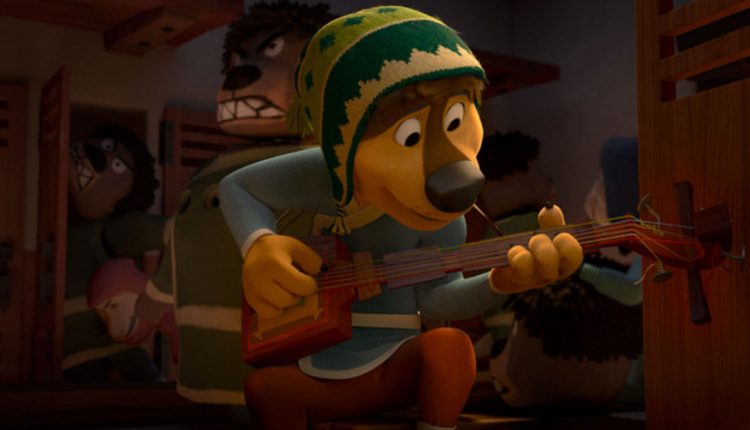 Simple and Cutesy, Ash Brannon’s adaptation of Zheng Jun’s graphic novel, Tibetan Rock Dog, may not be winning any awards anytime soon, it’s quite clearly a target for younger audiences but its unfussiness has an enduring quality that will leave even the hardest of adult hearts with a warm pulsating smile.

Being the son of the Tibetan Mastiff, Khampa (voice of J.K. Simmons), the leader of the towns Security forces, is an immense pressure for Bodi (voice of Luke Wilson), to follow in his father footsteps and his army of sheep in disguise, especially when Bodi’s heart settles on becoming a rock star after a radio falls from a plane passing overhead is far from his ultimate goal. With the words of the famous feline, Angus Scattergood (voice of Eddie Izzard) billowing out of its speakers on his rise to rock god status, Bodi becomes inspired to pick up his own guitar and twang a few strings to follow his dreams.

It’s hard not to be distracted by Eddie Izzard’s rock pussy cat Angus Scattergood, those quirky British tones are reminiscent of Russell Brand’s speedy mumblings, and his zany persona would have been a much better fit for this ego fuelled rock god who develops a conscious.

Finally wearing down his disapproving father, Bodi ventures to the nearest town to seek out and almost stalk Angus in order to help him become a star. In the meantime, Angus has his own problems – on a tight deadline to deliver his next multi-million dollar song, but with no idea of where his next luscious lyric will come from. Also hot on the heels of our wannabe pooch are a vicious pack of mafia type wolves, the wolfy enemy of his town his father is so adamant to protect – but when they find out the true identity of mountainous army a dastardly plot evolves, only Bodi and his new found friends can help save the day.

Brannon’s script is a predictable inevitability, rife with trickery and the unsurprising ensuing of self-analysis, the message that the world isn’t as clear-cut as you may think sings its way into the young ears of its intended audience. Uncomplicatedly witty in its quips, and brimming full of catchy songs and soul shaking performances, Rock Dog has a hint of nostalgia thrown in when Angus actually uses a cassette tape to lay down a track which will clearly lead to questions of confusion.

A little more oomph of determination and a little less candy could whip this unexpected animal tale into a much bigger deal, but it just falls short of being an overwhelming charming animation, however, its basic presentation and plot outline have a heart warming glow.