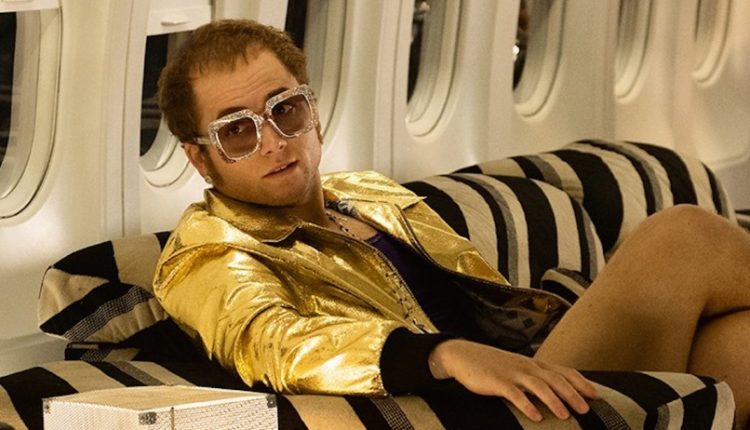 Although he made his directorial debut in 2011, UK director Dexter Fletcher is making a name for himself as the go-to guy for biopics. His 2016 film Eddie the Eagle focused on the eponymous Olympian and he memorably replaced Bryan Singer to finish last year’s award-winning Queen biopic Bohemian Rhapsody. Re-teaming with Eddie the Eagle‘s Taron Egerton, Fletcher takes on his biggest project to date.

Rocketman follows the life of musician Elton John (Egerton), starting from his early years as a musical prodigy in Pinner to his partnership with Bernie Taupin (Jamie Bell) and his struggles with fame, fortune and his sexuality.

Through the high-energy set pieces and memorable songs, Rocketman forgoes the biopic element for entertainment as Fletcher includes lots of unnecessary visual elements, hiding the man behind the performer. In concentrating on the controversial aspects of his life, Rocketman brushes aside a number of emotive factors such as his supportive grandmother (played by Gemma Jones) and his marriage to Renata Blauel (Celinde Schoenmaker). This prevents audiences from going deeper into the darker parts of his life and another dimension to the film.

In addition, it features a plot device seen in similar films such as A Star is Born and Bohemian Rhapsody about troubled musicians where there is minimal explanation or backstory. Hall’s bland screenplay offers little additional insight so audiences are left to assume things work out in the end. Therefore, this biopic doesn’t scratch past the surface of his identity and the only thing driving the film is the assurance of Elton’s ongoing career.

After box office bombs Billionaire Boy’s Club and last year’s Robin Hood, Egerton does his best to be Hollywood’s latest triple threat. Although his performance lacks depth in places, he tackles each musical scene with gusto and shares wonderful scenes with Bell, whose understated portrayal of Bernie Taupin is one of the film’s more endearing elements.

With Bohemian Rhapsody highlighting John Reid as a toxic presence, Richard Madden continues this portrayal here as Elton’s manager and slimeball lover. His introduction brings audiences down from Elton’s dizzying heights of fame and fortune, turning the protagonist into a sullen superstar so desperate for affection that he drowns himself in drugs and drink to keep Reid. Madden’s quietly menacing performance is enhanced by his looks and almost persuasive delivery, allowing him to be a dominant presence in serious scenes.

Ultimately, Rocketman is all about Elton John. Reflecting his showmanship, its dazzling musical sequences and its authenticity, especially to the costumes, are an appreciative nod to his career. Overall, its glitz and glamour make it a triumph of a musical. However, it fails as a biopic.

Rocketman is out in UK cinemas on Wednesday 22 May.