by Olly Buxton
in Film Review

In the Eighties, legend has it, the US armed forces hit upon the idea of encouraging Hollywood to make recruitment films for them. Thus, An Officer and a Gentleman, Top Gun, Navy SEALS and Private Benjamin (okay: maybe not Private Benjamin) were bankrolled by Uncle Sam specifically to make the military look glamorous so impressionable minds might sign up. As far as my mates were concerned it had the desired effect. Since we were slap bang in the middle of Nowheresville, South Pacific, they enlisted not for the Top Gun program but as RNZAF cadets and wound up clanking around the Chatham Islands in a forty-year-old Hercules. As far as I know they’re still doing it now. As a consequence, to this day none of them can abide Val Kilmer. But no matter.

Latterly this military recruitment tactic seemed to have fallen out of favour, but it might be back: Ben Affleck’s new movie Runner Runner plays so moralistically as a lecture against the evils of online gaming you have to wonder whether FBI’s Cybercrime Fraud folk didn’t have a stake – excuse the pun.

Subtext: online gaming can corrupt innocent and brilliant minds all too easily. 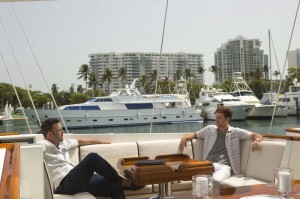 In Runner Runner, the possessor of said innocent and brilliant mind is a chap whom we note, with some irony, made his name corrupting them: Justin Timberlake. His character is Ted, or Fred, or Jack – not 20 minutes after the credits rolled I honestly can’t remember – a wily Princeton brainbox, already in penury for inciting games of chance amongst his college buddies, and about to get in a bit deeper when he starts mixing it with Mr Big on a Carribean Island.

Oddly, Timberlake has transmogrified himself from jailbait sex magnet into a faintly oatmealish actor (if Affleck is Theodore Logan, Timberlake is William S. Preston all over) whose only remaining mystery is how he ever passed for a sex symbol, even to a twelve year old, in the first place. 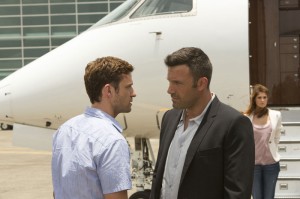 Affleck here plays the more charismatic part of dastardly e-Casino magnate Ivan Block. Still, this is a dramatic return to form for an unremarkable actor who has, of late, been doing a fine impression of having more to him than ever used to meet the eye.

Unltimately, Runner Runner is simply a paint-by-numbers Overcoming the Monster yarn with a strange title. It relies for its glamour on the absurd contrivance that people who set up online gaming companies in places like Costa Rica actually go out there and live in Bachanalian Xanadus, humping scores of prostitutes and throwing hapless local thugs to crocodiles. Here’s the news, folks: the only people who make money in tax havens by actually living there do so by preparing board resolutions. No crocodiles. 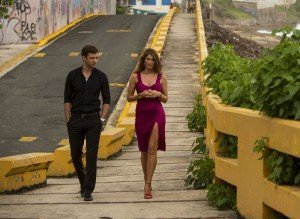 In this alternative universe (the same one inhabited by Tom Cruise’s The Firm, incidentally) there is therefore an exotic locale for Oatey Justin to voyage to, and armed henchmen, dopey customs officials, sharp-dressed undercover Feds and foxes by the armful to kick the meagre plot along. Gemma Arterton plays a budget Bond girl who seems to have been sprayed with Ronseal fencing stain.

Duly kicked, Runner Runner certainly canters along. It is not blighted by continuity errors, dialogue howlers or the dull and awkward moments that beset the comparable but inferior Savages. It isn’t a bad night out, but it’s short a car chase or two to be a decent actioner (charging round a carpark with a handycam is no substitute), and is missing a sandwich or two from the picnic hamper if it’s trying to make a political point.