Based on a personal ad that appeared in a magazine in 1997 (placed there by an employee to fill some space), Safety Not Guaranteed is a quirky comedy drama that’s about time travel, but often not in the traditional sense of the phrase.

Aubrey Plaza plays Darius, a young magazine intern who is taken on a job that involves finding out more about a man who placed a quirky ad looking for a companion to accompany him on some time travel. Karan Soni plays Arnau, a fellow intern along for the ride, and Jake Johnson is their boss, but he soon makes it clear that he’s hoping for nothing more than an all-expenses paid trip that will let him check out the ex-girlfriend (Jenica Bergere) he has never quite managed to get out of his mind for many years. When Darius finally meets the man who placed the ad, Kenneth (Mark Duplass), she ends up taking a liking to his attitude. And when some of his paranoia starts to seem as if it has a ring of truth about it, well, it makes the group wonder if his plan for time travel is really as far-fetched as they first thought.

Director Colin Trevorrow and writer Derek Connolly have really crafted a little gem here. A film that puts the idea of time travel into a context that keeps science out of the picture, for the most part, and shows the dangers of trying to travel back to a time that has been warped by memories, and the dangers of meddling with what should maybe just be left alone. All of this comes from the character played by Jake Johnson, but there are aspects of Darius and Kenneth that show just how similar almost everyone onscreen really is, and how selfish. Yet the two lead characters change as the film develops, whereas some others just remain, sadly, the same.

Plaza is great in her role, injecting a sweetness and child-like enthusiasm into her usual eye-rolling, smartass persona. She’s matched by Duplass, who wins over both Darius and viewers with his sweetness, even as his story seems to unravel when investigated further. Johnson is the worst character onscreen, but his performance is a great one, and there are moments when he shows a vulnerability before then bottling everything up again and hiding his real feelings with a mixture of alcohol and partying. He’s a sad figure, not a malicious one, and his scenes with Bergere give both some good stuff to work with. Soni may have the least to do, but he’s good fun in his role. 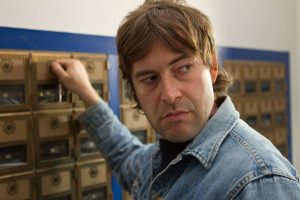 Safety Not Guaranteed takes a sci-fi premise and decides to spend the majority of the runtime looking at the human element. That may be frustrating for those who want either a pure sci-fi experience or just an enjoyable rom-com (and, apologies for not mentioning it sooner, but there ARE a number of rom-com moments here). But it turns the film into something that combines everything into an end result that feels fresh and fun. It also manages, in its own way, to provide plenty of food for thought. Like any good sci-fi should.

Safety Not Guaranteed is available in shiny disc form here in the UK on 24th February. Or, if you have a time machine, right now.