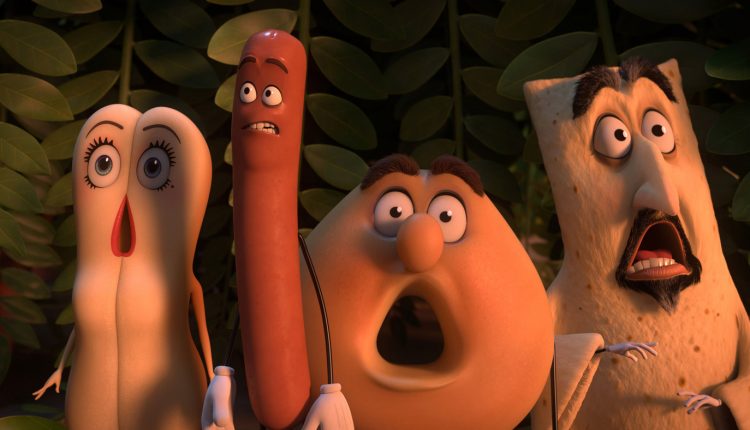 “What would it be like if our food had feelings?” is how Seth Rogen once described the innocent beginnings behind his latest Evan Goldberg-collaboration Sausage Party. Really messed up and filthy as hell is the unequivocal answer. A story about animated food items who discover the nightmarish truth to their existence might sound like the silliest movie of all time – and it is – but Sausage Party is also smart, subversive and packed with enough sexually-explicit wordplay to make a tomato flush. It’s no wonder it took eight years to win studio approval – the real surprise is that it ever got made in the first place.

It’s clear from the get go that Rogen, Goldberg and directors Greg Tiernan and Conrad Vernon intend to make the most of that unlikely opportunity as they gleefully push their playful premise beyond the boundaries of taste and decency. The result is an outrageous hybrid of cutesy animation and disturbing slasher-horror that’s stuffed full of dirty double-entendres, food-based atrocities, and naughty religious satire. If it sometimes stretches into overkill – there’s one disturbing sequence that’s particularly overzealous in its use of graphic imagery (you’ll know it when you see it) – more often the tone is pitched perfectly to create one of the most surprisingly inventive movies of the year.

The movie swiftly transforms into a much bolder and stranger piece than you might expect, revealing some big ideas behind all the juvenile japes. When a pot of honey mustard returns from the Great Beyond raving about the horrors that await on the other side, Frank suffers an existential crisis and sets out to discover the true purpose of vacuum-packed perishables.

Seemingly inspired by the work of South Park creators Trey Parker and Matt Stone, Rogen and Goldberg use playground humour and offensive gags as a guise to explore political and theological ideologies. So, the sausages’ belief that they need to ‘keep it in their packaging’ to remain pure becomes a raunchy allegory for virginity. Meanwhile, the Israeli-Palestine conflict is played out in a spat between a lavash and a bagel. And while it’s clear which side of the debate they fall, Rogen and co are still refreshingly keen to preach a message of tolerance and open exchange of ideas – something our own politicians should take to heart given the shambolic standard of debate during the recent referendum.

Naturally, not everything comes off without a hitch – the villain, a literal douche played as a juiced-up bro, feels entirely superfluous – but the plot unfolds at such a frantic pace there’s barely time to dwell upon the few flaws as we barrel towards a bombastic final set-piece that could easily rival any DC/Marvel movie for overblown carnage. That sets up a final scene which raises the possibility of an extremely meta sequel in the works. Now that’s a great beyond we’d be happy to pay a visit.