Here’s something (mildly) controversial. Saving Santa isn’t actually as bad as everyone has been saying. It might be because I’m an animation nutter, obsessed with musicals and spend 11 months of the year waiting for the one month I can legitimately watch Christmas films, but I actually quite enjoyed it. Martin Freeman voices Bernard D. Elf, an accident prone wannabe inventor whose previous inventions have caused havoc in his hometown. His latest, a hat that reminds people of their best Christmas memories, successfully takes out the town’s security so they show up on radars. This gives Neville Baddington (Tim Curry) the chance to take over the town and learn Santa’s secrets so his delivery company can become the best and fastest in the world. 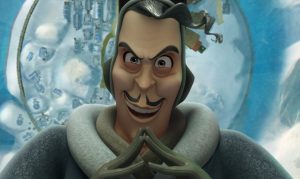 There are a few issues with the film and some of them aren’t small. First up is the animation which, frankly, sucks. It’s dated already, occasionally looks like the original Sims game and compared to other animation studios, it’s just not up to scratch. Think Jimmy Neutron, but a bit worse. The other problem is the execution of the story. Bernard goes back in time three or four times in various attempts to save his town. The first time he does it, his joy at being able to save the town results in a song which is sung over the song performed just before he travels back in time. It’s a clever way of doing things and raised hopes for the film. However, the rest of the time the film shows scenes seen earlier on which results in a large chunk of the running time being given over to scenes shown two, sometimes three times. It gets boring pretty quickly. Occasionally there are moments that work quite well with the time travel. At one point there are three Bernards running around town, none of which are allowed to see each other, but all of them end up hiding around the same fountain. The camera pans round to show each version, in various stages of understanding and time travel and it’s pretty funny. 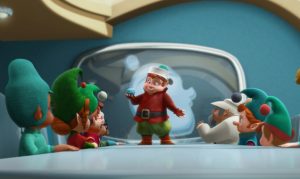 So it’s not all bad. The plus sides of Saving Santa are the songs, which are pretty brilliant, and the jokes, some of which are surprisingly funny. Martin Freeman belts his way through his showstopper song at the beginning of the film, and then again when there are two Bernards. There’s  also the relatively rubbish song Ashley Tisdale is given which doesn’t fit with the film at all but is good fun nonetheless. At one point, one of the (now many) Bernards comes out with the line “What are you doing here? I ordered nine ladies dancing” after being rudely woken by a reindeer. I have to say, that earned a pretty big laugh from me, as did Blitz (the reindeer) floating around the town. 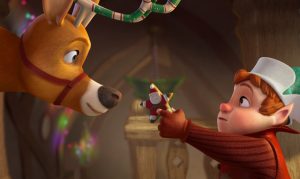 All in all, Saving Santa isn’t as horrible as people have been saying. Sure, it’s not the best film around but it’s got some decent moments and is a fairly good addition to the Christmas film roster. Despite the shoddy animation, reused scenes and lack of explanation as to what happens to the other Bernards, I found myself quite enjoying it. If you get into the spirit of it being a bit of a cheesy mess, you’ll enjoy it. And frankly, as long as a Christmas film makes me smile for at least half of the running time, it’s a winner. 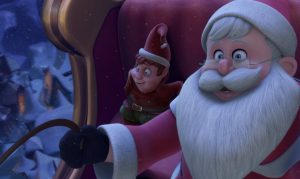