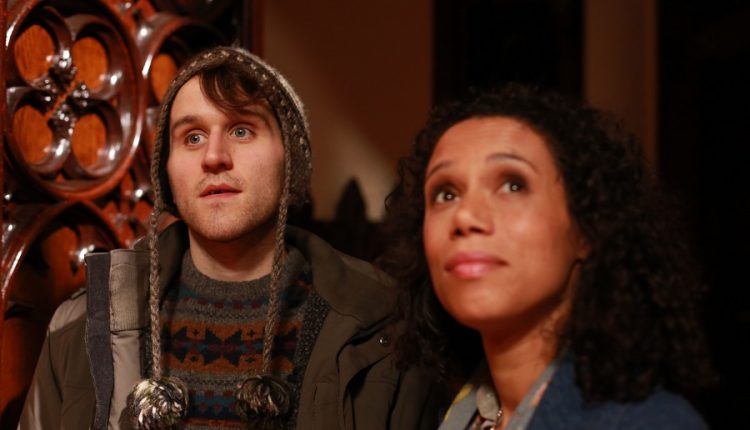 Central to the film is Harry Melling, Harry Potter‘s Dudley Dursley. He plays Tim, who, like his brother, Vic, is a Christian radical, under the influence of the cleric Father Enoch (Derek Jacobi). He has instructed Tim and Vic to travel to Ilkley to assassinate controversial atheist author, Professor John Huxley (Roger Allam) who will be taking part in the literature festival. When the wrong man is disposed of, the orphaned siblings endeavour to successfully complete their mission as the police descend on the area during its busiest period of the year.

Melling is captivating as a childlike innocent, beginning to doubt his conditioning in contrast to the volatile and seemingly wholly indoctrinated Vic, portrayed by a compelling Tom Brooke (Game Of Thrones). The relationship between the two is touchingly conveyed through the screenplay written by Michell and Jamie Fraser. Anna Maxwell Martin (Motherland) is entertaining as the hard-bitten police detective on the case while Vinette Robinson (Sherlock) pleases as an inadequately defined writer sympathetic to Tim. Jacobi and Allam, as an intellectual reminiscent of the late Christopher Hitchens who he physically resembles, both appear to have a ball essaying their roles. A male voice choir, present intermittently throughout, reflecting Tim’s internal struggles, is a device which soon palls.

The movie’s timely swipes at religious and intellectual intolerance are not always of sufficient substance to render them totally effective. Tim’s apparent crisis of conscience is not completely rationalised and Huxley’s character does not fully receive the satirisation he deserves. The film nonetheless engages and manages to make its audience care about its homicidal main figures.

With Say Your Prayers, Harry Michell reinvigorates the familiar cinematic trope of inept assassins and their botched assignments with an appealing and intriguing twist.

Say Your Prayers is available on demand from 28 September.