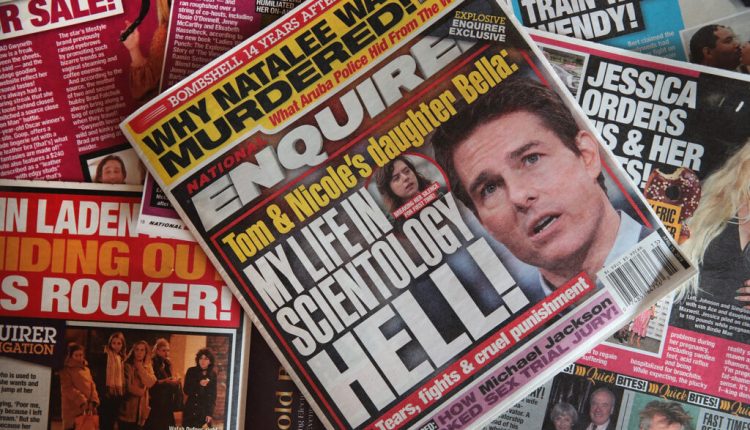 Scandalous: The Untold Story of the National Enquirer (2019) Film Review

One can argue the virtues (or lack thereof) for the inexplicably revered American gossip rag The National Enquirer. Somehow it is unimaginable to assume that no shopper has ever stood in the grocery line and not noticed or ventured a curious peek into the sensationalistic printed pages of this well-known sordid U.S. tabloid journalism publication proudly situated on the nearby newsstand. Whatever pop cultural impact The National Enquirer had on its devoted and/or demonstrative readers–good, bad, or indifferent–the one constant that remained is how polarizing the reported stories were pertaining to your favorite hedonistic celebrity, bizarre UFO happening or political pothole. The over-the-top headlines were surreal and sensationalistic but hey…the ridiculous read of The National Enquirer certainly worked its outlandish magic.

In writer-director Mark Landsman’s rousing and chippy documentary Scandalous: The Untold Story of the National Enquirer, he gathers some rather saucy observations about one of America’s guilty pleasure papers saturated in half-truths, full lies, cartoonish exaggerations, misleading scoops and yes…even legitimate accounts of reporting. There were a time and place when The National Enquirer entertained the curious masses with half-baked stories of the freakish kind (three-headed aliens found skateboarding or steroid babies with psychic powers perhaps?). But let’s face facts as celebrity-oriented fodder sells big time. It was a matter of time before the outrageous spreadsheet graduated to waxing poetics on some of your favorite offbeat TV, movie or music stars and their flashy foibles for the world to bask in with perverse delight. Unapologetically quirky and colorfully crass, Scandalous: The Untold Story of the National Enquirer is inspired in its zany madness dedicated to appetizing trashy tidbits that adorn its preposterous pages.

There is a lot that can be said for having a sense of clean fun while soaking up the tawdry dirt that tattle-tale tabloid embraced so impishly. Landsman’s animated documentary dutifully digs into the far-fetched histrionics of The National Enquirer as it finally progressed into an overly silly if not salacious source for celebrity-oriented frothiness of filth. The fact that this sleazy assortment of stories and weird-minded accounts stimulated those mindless minions as a preferred guilty pleasure acquired taste certainly made bottomfeeder journalism a legit phenomenon equally for the easily amused and the outraged.

It is revealed that the 1952 purchase of The National Enquirer by Generoso Pope Jr. (son of the Italian newspaper Il Progresso publisher and owner Generoso Sr.) soon began its gradual transition into a tabloid trade paper. Thirty-plus years later the Generosa rights to the tabloid were sold (Generosa Jr. died) to the high stakes interest of David Pecker. The countless years of far-out fluff pieces on suspicious alien sightings and hammy Hollywood-based hang-ups in the following era gave way for a whole new avenue of exploitation and excess through seedy methods of catching and killing stories that the paper favored on certain personalities (yes…Donald J. Trump comes to mind in this instance). The Pecker period of this tabloid ownership became heavily medicated in the political prairies at large. Pecker’s complicit protection of Trump and other influential bigwig clientele created a culture of editorial corruption.

Scandalous: The Untold Story of the National Enquirer is not what one would label a revolutionary documentary in its revealing tidbits. In fact, most may know or recall some of the past exploits associated with The National Enquirer in its three incarnations dating back to the early fifties. The evolution of the paper is rather fascinating as it is rich with unsteady material so over-the-top, scandalous, laughable and unbelievable that one cannot help but acknowledge this tabloid train wreck of hearsay. In some cases, the scandals uncovered by the Enquirer proved to be on the mark (witness the paper’s coverage of the O.J. Simpson murder case evidence details or even the breaking story of former U.S. presidential candidate John Edwards’ mistress-and-baby scandal). Additionally, one cannot overlook the comeuppance in the paper being subject to lawsuits by certain celebrities that dared to challenge the paper’s unethical reporting.

Landsman resourcefully revisits the nostalgia of the restless rag in all its glory and gumption. Among the talking heads regaling their delightful and/or dubious days (depending on your perspective) in the tacky trenches of the paper’s operations included various reporters, editors and staffing bigshots that reminisced about the tumultuous times. A slew of archival clips, clunky graphics, and name-dropping star power concerning the shifty likes of Bob Hope, Bill Cosby, and another political bad boy in U.S. senator Gary Hart are utilized by Landman about them having “a roving eye”.

Spilling the tea in the name of poisonous pleasures may seem corrosive to some and therapeutic to others but the one thing that is very clear about Scandalous: The Untold Story of the National Enquirer–its bumpy journey into the junkyard of the journalism barrel satisfying the inquiring minds that want to know the low blow.

Scandalous: The Untold Story of the National Enquirer