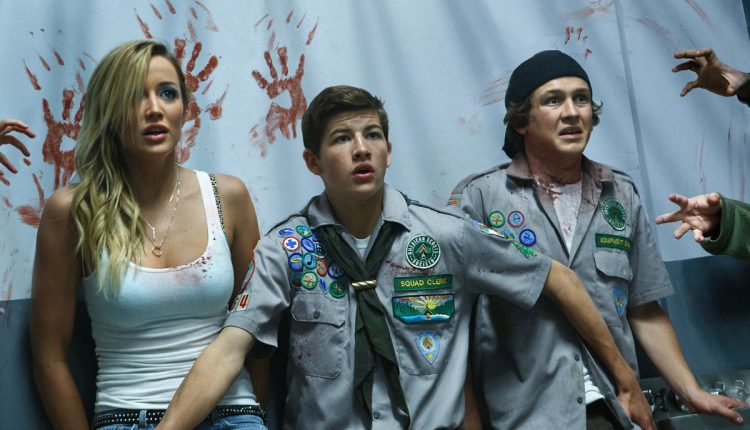 Scout’s Guide to the Zombie Apocalypse (2015)

Zombie comedies or ‘zom-coms’ such as Shaun of the Dead and Zombieland have seen ordinary people deal with zombies.  In most cases, they tend to stick in groups and find new and innovative ways to kill the undead.  In the instance of the latest film by Christopher B. Landon, who also directed Paranormal Activity: The Marked Ones, scouts are now getting the zom-com treatment.

Even with its snappy title, the film is essentially Zombieland and Superbad blended together.  Focusing on three boys, there is stereotypical teenage angst about ‘taboo’ crushes, lusting over impossibly beautiful girls and, basically, the importance of being cool.  Combined with being a scout, achieving any of these is an accomplishment.  However, this promising premise isn’t helped by its predictability, thanks to the blatant mashup of genres.  On the whole, the plot, characters and script (written by Carrie Evans, Emi Mochizuki and Lona Williams) are formulaic and the jokes are occasionally a hit and mainly miss, ranging from the ridiculous to the immature.

However, what Scout’s Guide to the Zombie Apocalypse has in its favour is the fun element.  There are little references to classic horror films, plenty of gore and neat, new ways to survive a horde of the undead.  The three leads are likeable and as a viewer, you want them to survive, and seeing them put their skills to good use is enjoyable.  As for the supporting roles, Dumont and Anchorman’s David Koechner as Scout Leader Rogers make the most of their limited screen time.

All in all, Scout’s Guide to the Zombie Apocalypse is a fun and likeable horror.  Just watch it with your brain at home.

Scout’s Guide to the Zombie Apocalypse is out in UK cinemas on 6 November.