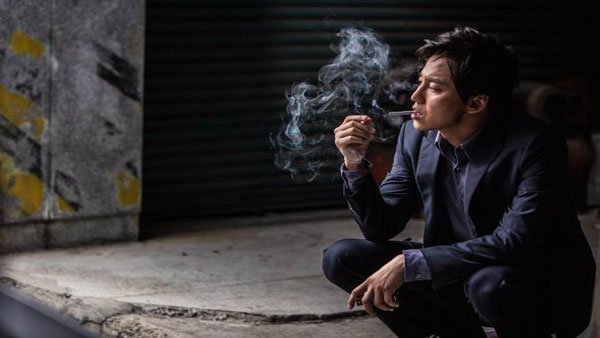 Life as a fictional police detective is never dull. Take poor old Jung Jae-Gon (Kim Nam-Gil). One moment he’s doggedly pursuing mob enforcer and murderer Park Jun-Gil (Park Sung-Woong), the next he’s undercover as the floor manager at a seedy hostess bar where he can’t help but find himself drawn to Park’s girlfriend Kim Hye-Kyung (Jeon Do-Yeon), the very woman he’s supposed to be dispassionately keeping tabs on in the hope of nabbing her lover when he returns. Needless to say, plans go somewhat awry as The Shameless successfully builds up a head of tortured steam.

Competing in the Un Certain Regard category at Cannes this year, often the place to find the more innovative films, Oh Seung-Uk’s second feature is a mostly conventional beast. Having only made one film 15 years prior, he shows a sure touch both behind the camera and with pen in hand. His screenplay sticks to the expected arc while managing to seamlessly mix crime and romance.

This mix is only ever going one way for the leading trio. A playful start livened up by bickering cops and comic musical cues gradually gives way to a fatalistic love story that threatens to bring everyone down. Park is the only one who seems to be enjoying himself. A violent rogue, he’s used to living on the permanent edge of disaster. If his life is only ever one step away from the end, at least it’s a step that he has the power to make. For Jung and Kim this scent of freedom is an intoxicating mirage that draws them blindly to the precipice.

After a start that sees Jung work his way around a number of informants to try and track down Park, his fate becomes entwined with Kim’s when he takes the undercover role to keep tabs on her. The police are sure Park will come back for his partner. All Jung has to do is wait. Except it’s never that simple. He also has to work, and the more he does so the more time he spends with her. These two lonely, beaten figures; one trapped in police work, the other in a sordid mix of sexual services and drugs, have not had the option to break out before. Together, they might just manage it. Neither looks like they truly believe it though.

Their burgeoning romance is mostly one of furtive glances and anxious repetition. While they rarely express their feelings directly, whenever one of them isn’t there, the other asks after them. This is where the fatalism comes in. Whichever side triumphs in the operation against Park, Jung and Kim lose. They talk of a life together and dismiss it for fear of where that hope might take them. The Shameless spends most of the time bubbling away quietly in this cauldron of desire, intriguing without ever thrilling. Teetering between competent genre mash-up and absorbing romantic noir, an operatic climax finally pushes it over the edge. It ends extremely well, just not for those involved.