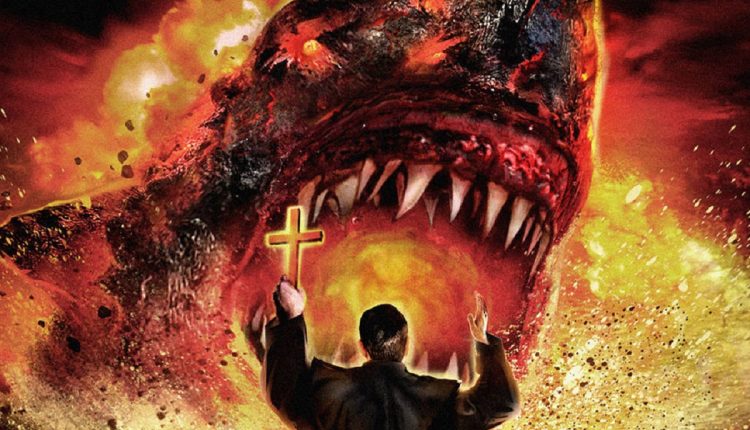 Despite the impression you can get from some individual reviews, and indeed some individual reviewers, most movie critics don’t go into movie viewings with the intention of having something to rip apart and insult when it’s all over. Even bad movies can be criticised constructively, and most clouds can have some small silver lining (e.g. show me a film with Sandra Bullock in a main role and I am already moderately happy for the duraton). But sometimes you catch a film that’s so bad it genuinely provides nothing that can be spun positively.

Shark Exorcist is one of those movies. Written and directed by the slightly infamous (in certain pockets of the internet) Donald Farmer, it’s a near-constant barrage of mind-boggling oddness and incompetence. A few of the actresses are quite pretty, and I only say that now as one of the only good things I can think of. Although I guess I should also give it a begrudged tip of the hat for the inclusion of the line “You’re going to need a bigger cross.”

The plot, hmmmm, how best to describe it. Well, things start off with a nun killing a woman. Which means a shark then appears in a lake. But the shark isn’t literally a shark, maybe, as it seems to transfer evil whenever it bites someone. Or maybe it is literally a shark, which explains the dodgy CGI moments showing it actually swimming through the water. Anyway, some time later we see some ladies swimming in the lake. One (Angela Kerecz) gets bitten, which leads to her turning into some kind of possessed shark woman. Because when she gets into water she turns all shark-like. But not literally. Or maybe it is literal, which explains the dodgy CGI moments showing the shark actually swimming through the water. And then we have someone (Roni Jonah) visiting the lake as part of a TV show in which she will investigate any lurking evil. And there’s a priest. Oh, and stay until some of the end credits have rolled for a completely pointless sequence featuring a girl visiting an aquarium.

That doesn’t even come close to describing every random event that occurs in the film, which also tries to distract you from the laughable script with a horribly intrusive score and camerawork that can only best be described as clunky, to put it as nicely as possible.

Not so much a movie, this is more of an endurance test. Thankfully, it’s also just over an hour in length (despite feeling like so much longer). And, although it goes without saying, the scariest thing about the whole endeavour is the prospect that Farmer may one day subject is to a sequel.

Shark Exorcist is available free for Amazon Prime members. And free is the only price point I’d recommend for the curious/foolhardy among you.