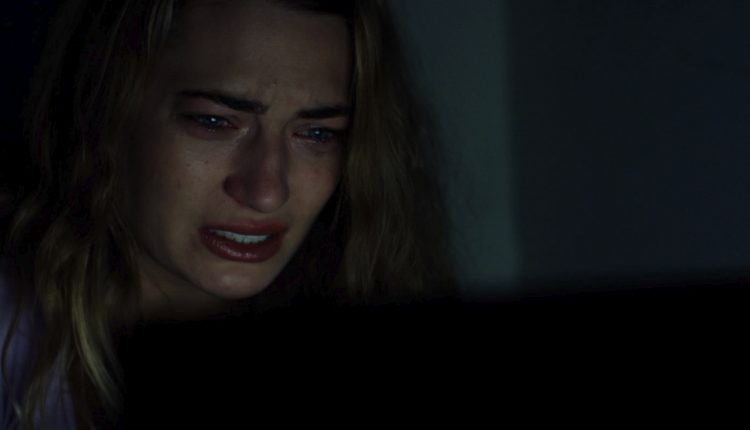 In Shudder’s latest horror offering Shook, Mia, a social influencer with over 18,000 followers, is forced to think about what truly matters when she is tormented by a man who lives across the street.

Shook is a film for the moment as it explores ideas surrounding social media popularity and the “fakeness” that comes with creating an online presence. We never know what’s truly going on in the photos that are plastered on Instagram and Facebook; whether they’ve been photoshopped a tiny bit to make someone seem thinner or manipulated entirely to make it look like someone is holidaying in Thailand, when in reality, they’re just in a rather nice garden.

After trying to do something good – dog-sitting for her ill sister – Mia is “shook” to discover she has become the target of a very real, murderous campaign. She finds herself on the phone to neighbour Kellan, who has kidnapped her socially influential BFFs, and threatens to kill them if Mia doesn’t go along with his sick games. However, all is not what it seems – a lesson we’ve all learnt from being on the internet – and it soon becomes clear that there is far more going on than what she initially expected. Shook has many a twist and turns, begging the question of whether what’s happening is real or just a game, live-streamed to the masses. It’ll keep you guessing for a little while, but unfortunately, it’s neither interesting, scary or threatening enough to have its audience care either way.

As Mia, Daisye Tutor does as well as can be expected – she potters round the house calling for the dog that has seemingly vanished and gives many a “why are you doing this?” and “why me’s?” that you’d expect from being in this situation. The whole film rests on her shoulders and her performance is decent enough that you’ll stick with it, experiencing the ups and, mostly, downs of what comes with being Insta-famous.

What eventually unravels is all a bit silly and when Shook finally bares its truth, it becomes extremely farfetched. It’s an ending I never saw coming, but when it is revealed, you may find you side with the killer on this one. But, perhaps that is the point. The real horror is the internet and what it has become, a stage for show-offs, liars and fake news.

You’ll neither beg for the film to be over or feel enlightened by its teachings but Shook has a couple of mild jumps and surprises that’ll ensure you make it to the end without feeling entirely unhappy. Shook is very average at best, but if you’re willing to take the film as what it most simply is; a twisting semi-slasher with basic social commentary, it is mildly entertaining. For something similar, but far better, check out Host.

Shook is out now on Shudder.