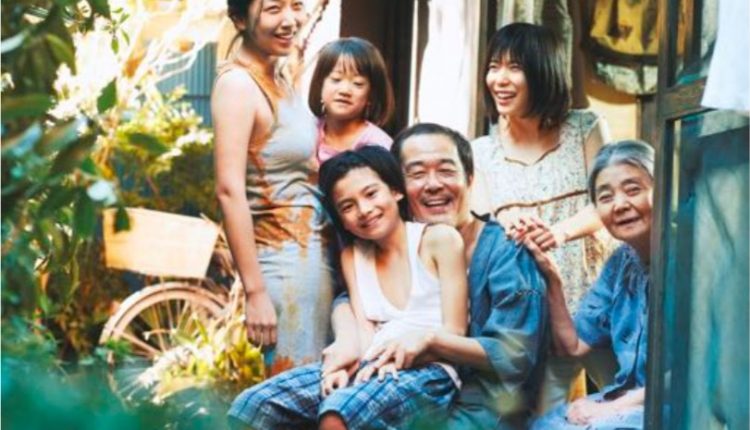 Almost 17 years since his Cannes debut, Japanese filmmaker Hirokazu Kore-eda made his mark at this year’s festival with his latest film Shoplifters. The drama went on to win the prestigious Palme d’Or and become the first Japanese film to win the award since 1997.

Shoplifters focuses on an impoverished family who relies on grandmother Hatsue (Kirin Kiki)’s pension as their main source of income. One day. Osamu (Lily Franky) and his son Shota (Jyo Kairi) encounter Yuri (Sasaki Miyu), a young girl who is neglected by her parents. Afraid that she is being abused at home, Osamu and his family informally adopt her.

Highlighting a side of Japan that is not dominated by technology, quirky animated characters or tradition, Shoplifters presents the theme of poverty as an acceptable way of life through the mostly mundane character narratives – Osamu and Nobuyo (Sakura Ando) are experiencing work issues and Shota shoplifts for supplies. Despite their bleak situation, there is a sense of serenity and contentment. Their ‘adoption’ of Yuri surprisingly causes little disruption to the household – while there is a constant fear of her being found and their crime is exposed, Yuri gets to experience love and affection, possibly for the first time in her life.

As the story takes an unexpected turn, so does the integrity of the characters as we are left to question their morality and the extent of their deceit. In addition, this close-knit family life effectively conceals their self-imposed isolation from the rest of the world, leading to the idea that not all is at it seems behind closed doors.

While this has the potential of becoming a bleak melodrama, Kore-eda ensures the story retains a sense of poignancy and emotionality.  His natural direction highlights the intimate family life and the pessimism of their situation, while his dialogue slowly builds intrigue amid touches of humour. Franky and Ando are eccentric leads while young newcomers Sasaki Miyu and Jyo Kairi are sweetly innocent as Yuri and Shota.

Overall, Shoplifters delivers a deeply affecting and unapologetic perspective on the hardships of everyday people yet their dedication to remaining a family unit makes it endearing and emotional.