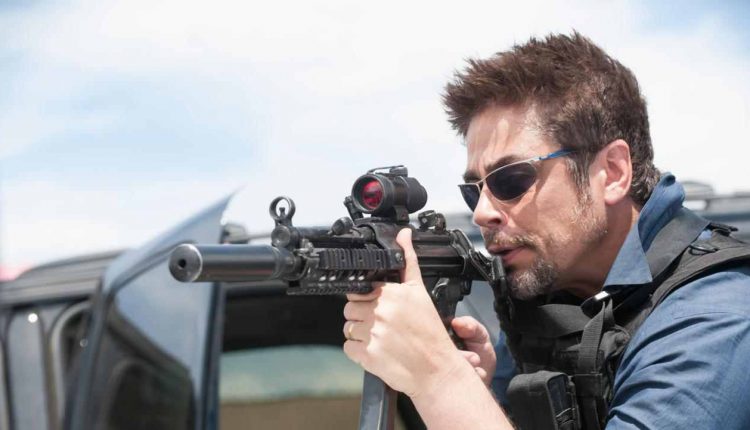 Sicario is Denis Villeneuve’s most concentrated, compact film. It’s about a US operation, unfolding over only a few days, to follow a US-based Mexican drug “jefe” back to his high-level cartel boss, thus to disable a significant part of the international drug trade. The chief agent behind this action describes it as equivalent to discovering a new vaccine. The catch is that the maverick US operatives behind this venture — DEA, Department of Defense, FBI, or CIA, whatever they are — have to break the law in major ways to achieve their aims, and the innocent observers can do nothing about that. As an opening text explains, “Sicario” means “hit man.” Viewers may remember the 2000 Barbet Schroeder film The Virgin of the Assassins/La vergin de los sicarios, which was shot on actual very dangerous locations, and concerned the Medellín, Colombia drug cartels of earlier days. Medellín has, ironically, become a matter of nostalgia to the battlers in today’s drug war, and who is the hit man, who the good guy or bad guy, more blurred.In Villeneuve’s film there are only a few players; it’s wonderful how economical and efficient this story by “Sons of Anarchy” actor Taylor Sheridan is. It uses the time-honored device of focusing on an innocent person, a relative newcomer, through whose eyes the audience can experience events. This person is an FBI agent, Kate Macer (Emily Blunt). She is shocked by what she sees. She’s brought in by a grinning, gum-chewing mystery man slouched around a table wearing flip-flops, like a Silicon Valley capitalist. He’s called Matt (Josh Brolin). He has with him an even more sinister character with hooded eyes, Alejandro (Benicio del Toro). Del Toro is the real star of the show, with the most complex role (Blunt’s sincere one is unfortunately rather one-note). He gets a dramatic entrance, appearing suddenly, unannounced in a private plane about to take off with Matt and Kate on board. Kate brings along a partner and driver, Reggie (Daniel Kaluuya), who’s as innocent and shocked by the lawlessness of what they’ve been brought into as Kate is.Sicario plays around a little with point of view, relying primarily on Kate’s for audience sympathy but switching to Alejandro’s at a key, climactic, moment, and going omniscient via bird’s eye views, heat-sensor vision, and remote images at times to show the larger outlines of the operation. Roger Deakins’ accomplished but conventional cinematography keeps all this clear and dramatic, the drama underlined by a score, also conventional, but well done, by Icelandic composer Jóhann Jóhannsson.

But before we get into any of this there comes a rip-snorter of a noisy opening sequence. In it, Kate plays a key role in a big, violent, highly dangerous police break-in of a Stateside drug dealer warehouse that turns out to be not only mined with bombs, but packed with dozens of gruesome walled-in and locked away corpses. This is the kind of thing Kate and Reggie have been involved in, but only shows how massive their enemy is and how puny their effect on it is. This bang-up event, which she survives, draws the attention of the mysterious higher ups to Kate, and they ask her to join them for an operation closer to the cartels. She feels dubious about Matt’s cavalier vagueness but admits her dent into the drug trade has been low-level and wants to go along — to El Paso, she thinks, without Reggie.

Sicario may seem to rehash material from Traffic (which also featured del Toro and was adapted from the English miniseries Traffik) only with a more limited perspective, since it lacksTraffic/Traffik’s constant dramatically shifting points of view. But Villeneuve has made a stunningly efficient, classically simple action film that viscerally communicates its troubling moral and political overtones about how maybe you can’t fight evil without becoming evil yourself, and so on, all virtually within this single action.

In his enthusiastic Cannes defense for The Dissolve (because he felt Sicario was being damned with faint praise) Mike D’Angelo, primed with the rules of scenario-writing, explains that Kate is a passive protagonist — she really can’t do anything to stop the illegality — and that’s nearly always a very bad idea — but he argues that this works because Blunt is good and because her character goes through so much. She may be passive toward the whole operation but the way she must fight to survive from the first sequence on makes her exciting to follow. D’Angelo commends the film for making Brolin’s character “a happy asshole from start to finish,” and allowing del Toro to do his finest work since Traffic. Actually Alejandro is a more stunning, shocking character than the one he played in Soderbergh’s adaptation. I might add that unlike Mike, who came to Sicario previously unimpressed by Villeneuve, I was pretty impressed by one earlier Villeneuve film, he multi-timeframe, multi-country play adaptation Incendies, which showed tremendous promise despite being pretentious and over-ambitious. I found Villeneuve’s two 2013 Jake Gyllenhaal vehicles Prisoner and Enemies attention-grabbing but unconvincing. But here he achieves the moral and political complexity of Incendies more simply, and without its pretension. Sicario is a visceral thriller with a twist that allows it to operate on many levels so it can be exciting and though-provoking, an audience-pleaser and intelligent cinema at the same time.

Sicario debuted in Competition at Cannes May 2015, and opens in the UK 8th October 2015.