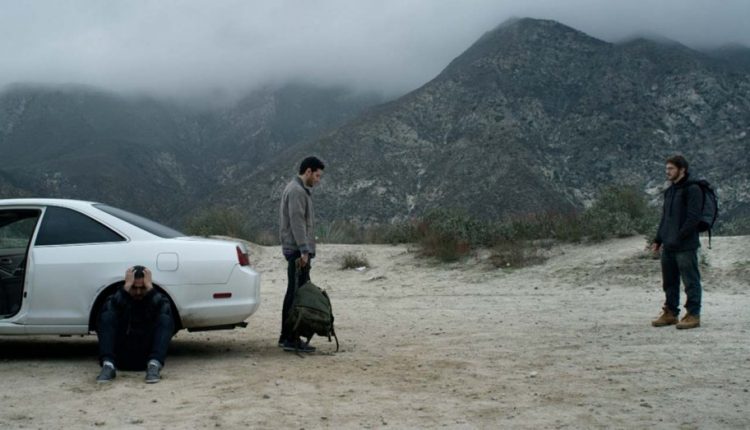 Writer-director Kyle Schadt’s revisits familiar territory with the “hiding the dead body” genre in the pedestrian crime thriller Silent Panic. Surprisingly uninvolving and flavorless, Schadt’s male-bonding excursion into the seedy cover-up of handling an unsuspecting female corpse could have been convincingly more adventurous and cynical in its approach to this pseudo- shifty suspense yarn. Unfortunately, Silent Panic is as generically conceived as its titular name.

Silent Panic awkwardly pleads its case in assuming the skin of a calculating crime whodunnit drenched in paranoia and secrecy. However, Schadt’s outdoors potboiler is based on the trappings of contrivance. The premise sounds rather promising had Schadt’s script incorporated some tracings of distinction and compelling dilemma. Sadly, Silent Panic never pulls the trigger on its payoff and this “good ol’-boys-body shielding” caper feels notoriously staid.

The premise involves a trio of buddies partaking in a camping trip until the unimaginable happens–they discover a female dead body in the trunk of their car. Prior to coming across the curvaceous corpse, friends Eagle (Sean Nateghi), Bobby (Joseph Martinez), and Dominic (Jay Habre) were chilling out alongside the campfire while enjoying the loose-minded chatter that typical guys engage in at random. Naturally, all seems well until the pals retreat to ex-con Eagle’s vehicle whereupon the lifeless body pops up out of nowhere. Soon, the so-called silent panic sets in methodically.

The obvious reaction for the threesome campers is to fret over what to do concerning this awkward and dire predicament. The introduction of what and what not to do morally regarding this crime unexpectedly is thrust upon them without any preparation. So what are the former felon Eagle and his cohorts to do at this point? All three men are vulnerable based on their questionable pasts although it appears that leader Eagle may have the most to lose given his checkered criminal background. Can all three of these conflicted friends stay on the same page in terms of handling this potentially explosive incident? Eagle steps up and assumes the responsibility for the dead body management while strong-arming Bobby and Dominic to remain calm and collected in the process. Apparently, the thought of reporting the mysterious corpse to the police is not in the cards for the worrisome Eagle.

Thus, Eagle gambles on transporting the corpse to his home as he figures out what to do with the disposal of the stiff that remains in his trunk. The nervous Eagle must show some restraint around wife Robin (Constance Brenneman) as her inquiries about her husband’s camp outing add more cause for pressure and paranoia. The stakes are even higher (and more ridiculous) when Robin takes the car out for completing some unfinished errands. In panic mode, Eagle is forced to track her down on a bicycle and come up with ready-made excuses to avoid Robin from opening the trunk. Another clumsy anecdote involving Eagle’s car being stolen with the dead body inside registers as yet another forced and lame element that can only be dismissed as unintentionally laughable.

In the meantime, Eagle’s co-conspirators Bobby and Dominic must contend with their own brand of strife besides sharing the association of being connected to the mysterious dead body in Eagle’s custody. Divorced and single father Bobby–wallowing in joblessness–still struggles with his cocaine addiction as he sadly and comically has hooked up with aging hippie drug dealer Frank (Jeff Dowd) to count on his drug fix. As for Dominic, he is the writer whose dalliance with young co-ed Sharon (Juliet Frew) consumes most of his time. Eagle’s ineptitude with his car-carrying corpse, Bobby’s drug-addled dealing with dope supplier Frank, and Dominic’s hormonal tendencies toward a young tart–all seem like elaborate nonsensical filler to already pad what amounts to be a labored, thin-laced character study thriller.

Subsequently, Silent Panic meanders all over the place with its dependency on outlandish coincidences, sophomoric dialogue, situational sluggishness, and the watered-down tension that makes the dramatic overtones feel synthetic. Schadt cannot decide properly whether Silent Panic wants to dabble in the realm of a crime noir or pose as an off-kilter sardonic farce. Either way, the repetitive string of errors in trying to ditch the dead body while welcoming all the incidental conveniences of trivial chaos does run its tedious course.

Silent Panic fails to reach its potential as a complex corpse-coated caper saddled in lightweight banter (who’s a better NFL quarterback–Joe Namath or Joe Montana?) and cliched conflict (how can we ditch this bothersome dead body without facing the inevitable consequences?). The common consensus regarding Schadt’s pet project is clear in that both this flick and its featured diva-like dead body should have simply been buried along the side of a dusty road.