by Chris Binding
in Film Review

Ever since Frank Miller and Robert Rodriguez’s collaboration introduced the world to the sexualised, hyper violent world of Sin City, fans have been salivating over news of a sequel and its potential to continue the original flicks classic story-lines while introducing new characters. However despite its hype, Sin City: A Dame To Kill For fails to surpass the brilliance of the original movie, with slivers of misogyny and a clunky transition between the major story-lines. While these problems are a matter of structure and form, the visual elements of 3D influenced neo – noir remain striking with action sequences often morphing between different art styles  transporting viewers from gritty gore to the smooth visual splendor. However, one persons ‘artistic experience’ is another’s ‘smoke and mirrors’ and behind these visuals  the film really suffers from its overall tone and content.

The central plotlines revolve around Marv (Mickey Rourke) waking up in a pile of bodies wondering how he got there, Nancy (Jessica Alba) struggling to cope with the suicide of John Hartigan (Bruce Willis), a cocky young gambler Johnny (Joseph Gordon Levitt) with a vendetta to take down crooked politician (Powers Boothe) and Dwight Mccarthy (Josh Brolin) and his dealings with femme fatale Ava Lord (Eva Green). All tales primarily focus upon vengeance with Marv moving between all of them as a carnivorous enforcer as the separate segments repeat the standard Sin City formula of inner monologue, violence and pulp dialogue. 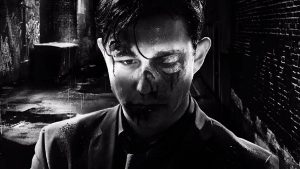 While Joseph Gordon Levitt’s story-line is the most enjoyable because of its simple vendetta arc and flashy gambling scenes, other story-lines become muddled and monotonous crippling under the weight of their own perceived complexity. While misogynistic claims are commonly made against Frank Miller and his work, Eva Green’s character Ava Lord won’t help dispel them – conceived as a perpetually naked Egyptian goddess and arch manipulator , driving men to insanity as an horrific harlot with spurned men lining up to dispose of her. Fittingly, Miller’s other women barley transcend the type of ‘hookers or angels’ and behind the cigarette smoke and noir veneer is a Sin City that has gotten a lot nastier this time around, as an inherent cruelty stains the streets and characters are reduced to the simple binary of  good / bad ‘bad guys’ and good / evil ‘sluts’.

While Sin City fans have come to expect and even revere Miller and Rodriguez’s fetishism for a world inspired by Brando movies, muscle cars, leather bound thugs and the gendered / racial stereotypes that accompany this era, it was disappointing to see few fresh elements injected into the formula. While it was entertaining to be back in the dark cesspit of Sin City again, 120 minutes was a little too much to handle and I doubt I will be returning to Sin City anytime soon. As Jessica Alba’s character states ‘this city soils everyone’ and while I don’t feel soiled personally, I think the Sin City franchises’ longevity is another matter entirely.