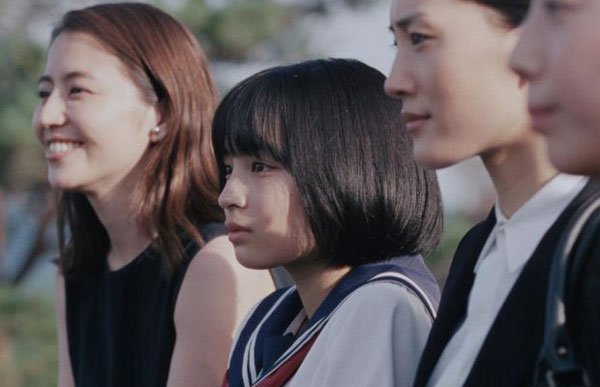 The shadow cast by lacklustre parenting looms large over Japanese director Hirokazu Kore-eda’s new film, even as the parents themselves are all but absent from the screen. Having made his debut two decades ago, Kore-eda has mastered the understated family drama, producing a consistently strong body of work. Sad without cynicism, hopeful but never fake, Our Little Sister is a worthy addition to the canon.

The film opens with a death. Three sisters all in their twenties, Sachi (Ayase Haruka), Yoshino (Nagasawa Masami) and Chika (Kaho), live together in the family home long abandoned by their adulterous father and weak mother. Absent for 15 years, they learn he’s died and travel to the funeral where they meet his disinterested widow and their 13 year old half-sister of the title, Suzu (Hirose Suzu). Taking Suzu, now an orphan, back with them, they live as a family even though the past continues to hover ominously just out of sight.

It’s a simple set-up, the kind Kore-eda frequently favours, and he mines it for every last ounce of emotion. Unfolding in what starts to feel like a series of vignettes, threads are woven together until the picture is complete. Sachi has assumed the role of parent for her two more carefree siblings, a fact that causes some consternation when their mother briefly reappears on the scene. All three of the older sisters have romantic subplots. Sachi’s is the saddest involving the very same adulterous set-up they deplored their father for. Other characters float in, most notably the owner of a local diner suffering from physical and financial troubles.

Through all of this, Suzu gradually bonds with her new family. Sachi in particular is devastated that her baby sister lost out on a childhood, forced to care for their father in much the same way she had to take responsibility for her siblings. These errant parents reach out from the past, continuing to project their failings. Kore-eda isn’t satisfied with cheap dramatic reveals on the way to this revelation. Obvious developments are ignored. In many ways, Suzu’s relocation goes swimmingly. She moves to a new school and makes friends immediately. Everyone loves her. All three sisters enjoy their jobs, or at the very least the company they keep while at work. Even the seriously ill diner owner accepts her lot, unwilling to turn it into a major plot point. This keeps attention on the harm done to the sisters by their parents. They don’t talk about their father, and both mothers are kept largely off the table until the thaw sets in.

If there’s a weakness, it’s the tight focus on the four sisters. The tantalising glimpse of their father’s latest wife and the slightly longer spell spent with the first one cry out for further development. The film is also too long, additional scenes mounting up to test patience near the end. Even then, Kore-eda manages to bring it back together, ending each one with a beautifully judged emotional punchline.

With Our Little Sister competing for the Palme d’Or this year, there’s a growing feeling that Kore-eda’s time must soon come. This is his second consecutive nomination after Like Father, Like Son in 2013. I’m not convinced he deserves it for this, an effort that lands in the merely very good category rather than great. There are a few too many moments of drift to mark it out as his crowning achievement. Still, this is the kind of emotionally intelligent filmmaking that’s always a joy to watch. It’s a hard heart that could ignore such a lovely hymn to sisterly love.