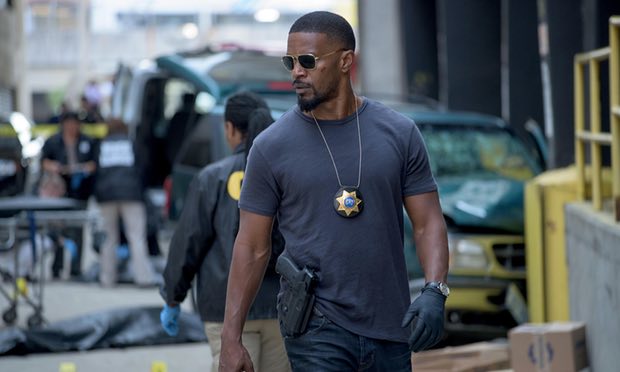 A lean, relentlessly paced barrage of woozy getaways and brutal brawls, Sleepless Night is a gritty French thriller following a complex action hero whose toughness barely masks his exhaustion and desperation. This cliche riddled American remake is none of those things. Starring Jamie Foxx as an undercover Vegas cop whose teenage sprog is snatched by drug dealers, Sleepless is a thoughtless and redundant retread that has little that’s fresh to offer to a tired genre.

Vincent Downs (Foxx) is a corrupt homicide detective who, along with his trusted partner, has just swiped a load of cocaine belonging to crooked casino owner Rubino (Dermot Mulroney). Little does Downs know, the merch was promised to an even nastier criminal, Novak (Scoot McNairy), who’s prepared to do whatever it takes to retrieve his stolen goods. That includes kidnapping Downs’ innocent son Thomas (Octavious J. Johnson) and holding him hostage in exchange for the drugs. And so begins a desperate race to save his son and bring down a sprawling corruption network before Michelle Monaghan’s smart internal affairs officer tracks him down.

True to the original, the bulk of the action takes place from dusk till dawn in a plush Las Vegas nightclub. A contained setting and a ticking clock (Downs has a pretty severe knife wound that occasionally slows him down) can make for an exciting combo – see: The Raid – but director Baran bo Odar’s efforts here lack the necessary invention to overcome any narrative restrictions. Instead the plot twists and turns in increasingly absurd directions to keep the story moving forward as the entire cast engage in a convoluted game of hide the big bag of drugs. The action itself is effective enough, with a smoke-filled parking lot shootout, in particular, setting the pulse racing. Yet the set-pieces quickly become repetitive – there’s only so many times Odar can repeat the same sequence of moves before the audience realises he’s running short of ideas.

Jamie Foxx uses every shred of his star wattage to turn Downs into an engaging action hero, but any layers he instills in his character are undone by the type of rote backstory – a marriage on the rocks, a distant relationship with his son – that always fails to grab viewers’ attentions. The rest of the cast are a similarly uninspiring bunch. Mulroney seems to be playing a disturbing hybrid of Michael Corleone and David Brent as treacherous casino owner Rubino. McNairy’s Novak is the type of ruthless bad guy who we’re repeatedly told we should be intimidated by without every seeing an evidence as to why. And David Harbour spends so much of the film playing such a stereotypically bland partner that it dampens the impact of his character’s big reveal.

Operating as a female internal affairs officer who has to work twice as hard to earn the respect of her male colleagues, only Monaghan’s Bryant really switches up the formula. Returning to the force after being assaulted by a vicious meth head, Bryant refuses to acknowledge the trauma caused by her attack for fear of losing face in a male dominated department and recklessly throws herself into a pursuit of Downs to prove her mettle, endangering the investigation and her own life in the process. Smart, tough, and darkly complex in ways we rarely see on the big screen, Sleepless would’ve been much better served pushing Monaghan front and centre. It would surely have been better than persisting with this dull, tediously routine excuse for a corrupt cop caper.