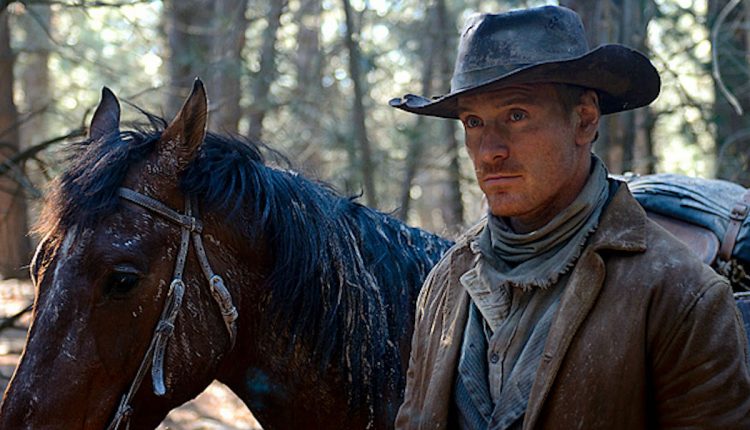 When he signed on to finance and star in this picture Michael Fassbender must have had in mind one of those slow-burning, lyrical westerns like Unforgiven. He might have imagined gaining some Clint Eastwood grit, too: His is a handsome, square-jawed face, his eyes are bright sapphires, but he is urbane: in outings to date there has been little of the wild frontier about him.

Perhaps, by going unshaven and chomping on a cheroot, he could channel The Man With No Name. Especially juxtaposed against snow-complexioned Jay Cavendish (Jodi Smit-McPhee), a young man who has the misfortune to look like a pubescent Andy Murray and who in this picture has little to do but gape like a goldfish at all that goes on.

Slow West is, as the name on its tin suggests, a picture long on chasmal wide-shots and smouldering looks, but short on dialogue and action. The dialogue must, therefore, count. It must be profound. It be moving. It must work overtime to define its characters. Winsome tableaux of New Zealand’s handsome McKenzie Country won’t do that. But unless I missed a whole level of irony, the script delivers neither profundity nor definition. The journey on which it propels its characters is moot.

Much of this can be laid at the door of John Maclean, once of the Beta Band, for he both wrote and directed Slow West. This is his first full length feature. It shows.

It ought to take something momentous to impel a sixteen-year-old lad as feebly constituted as Cavendish to journey alone from Scotland to frontier Colorado, yet all we are told is that he pursues a lass, Rose (Caren Pistorius), with whom he once rolled down some sand dunes. And we are literally told it: The film starts, over a black screen, with Fassbender announcing:

“Once upon a time, Jay Cavendish travelled from the cold shoulder of Scotland to the baking heart of America to find his love: A jack-rabbit in a den of wolves.”

Now leaving aside the concentration of platitudes that this voiceover represents, it also neuters the very power of the film: Maclean’s primary job is to show just this, not to have Fassbender tell us.

So, an under-explained lad sets out on an implausible Odyssey to a violent and degenerate land, the best accounting for which is that the boy is a bit dim. At least that’s something: of Fassbender’s character, Silas Selleck, we know nothing at all. His motivations are at first masked from, then quickly revealed to the audience (guess what: he’s compromised) but the internal struggle through which he must go to arrive at the film’s climax is taken as read. Yet that is precisely what a slow-burning, lyrical western should be about. By age and life experience, Jay is necessarily one-dimensional: inexplicably, Maclean asks Fassbender to be so as well. His script is studded with dialogue as corny as this:

In fact, Fassbender’s chief role seems to be to patronise the audience. A posse of bounty hunters arrives on the crest of the hill, John Ford Style. They could hardly be anything else. “They’re bounty hunters” says Silas.

Without personalities or conversation to spur on their actions, the characters are left behaving in ways that can only be understood by reference to the dictates of the plot. This is not how effective drama works.

Rory McCann (better known as Sandor “The Hound” Clegane in Game of Thrones) has a late cameo as Rose’s father, but this import from the most beautifully characterised drama since Dallas really serves only to highlight McLean’s failure to build interesting characters here.

For a slow-burning film, it is blessedly over in well under an hour and a half.