by Thomas Johnson
in Film Review

Framed in flashbacks as the film’s protagonist hands over the stolen information that thrust him into fame, or infamy depending on what side of the fence you sit, Oliver Stone’s new biopic Snowden (2016) delves deep into the interesting life of a whistle-blower. Based on a written account of the affair and also a fictional interpretation of the events, the film portrays the truth in a pleasantly cinematic manner.

Edward Snowden, known by many as the ex-C.I.A. contractor who exposed the NSA’s penchant for spying on the world, provides a perfect character study for the post-internet world to thoroughly enjoy.  Much akin to The Social Network’s (2010) Mark Zuckerberg, Snowden is presented as a likeable super-geek with the determination and raw talent to shake the world. All this plus he is portrayed particularly accurately by Joseph Gordon-Levitt. At times it seems surprising that it is actually Gordon-Levitt. The voice is perfect and he somehow manages to capture the quietly paranoid nature of Snowden.

The plot is compelling throughout most of the film with the flashbacks from Snowden’s life being chosen well, in the majority anyway. A large number of the harks back to Snowden’s relationship with his long-term girlfriend Lindsay Mills are poorly thought out and at times induce minor winces. This is in part down to Shailene Woodley’s character, Mills. It seems the dialogue would be hard to act well as it’s just pretty weak rendering it unfair to blame Woodley. That honour should be bestowed upon Stone and Kieran Fitzgerald, the scriptwriters.

In other news, as imagined, Nicholas Cage’s character is surreal and highly unpredictable. As is Rhys Ifans’ although not necessarily for the positive.
The former plays a teacher that Snowden only comes into contact with on more friendly terms when he was training with the C.I.A. while the latter plays the C.I.A. Deputy Director who is also tasked with training Snowden, regrettably in a more hard-line manner.
Although Cage has limited screen time, he plays the kind of educator that is more interested in his students rather than himself well. His timeline throughout the film is sadly not really included in the cut, his character is more hinted at.
Ifans on the other hand is unfortunately a regular fixture for the duration of the film. Originally being his commanding officer at the C.I.A., who involves Snowden in activities beyond his moral compass, he later becomes a friend and a vital contact.
The attention to detail that the film shows within Snowden’s different jobs is remarkable. Actual programs that he developed while working for the N.S.A. show the true ingenuity of the film’s subject.

The flashbacks additionally remain topical. They are displayed concurrent with major events in American politics from just before Obama’s first run up until directly after his second inauguration. The re-enactments of Snowden’s life are spliced with real speeches that Obama and other related officials gave regarding the C.I.A. and N.S.A.’s access to the American public’s privacy.
Parts of the film also contain really effective camera and post-production effects that are used purposefully. Especially, but not only, when Snowden falls into states of seizure.

In all, Stone’s suspicious, investigative biography supports Snowden’s actions but it would seem that it was made to appeal to an audience of the same opinion. Even if it isn’t it would do well to convince opposers. 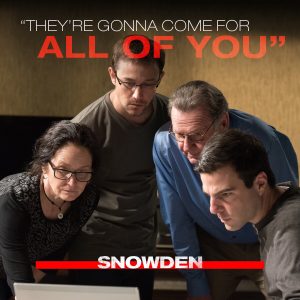