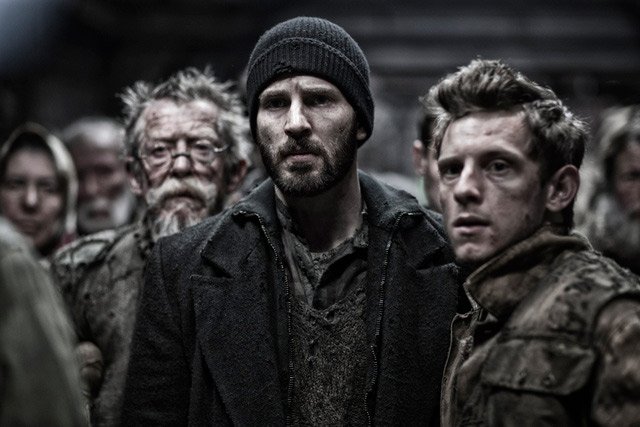 Similar to a trip on Southern Rail, Snowpiercer suffered a series of delays and cancellations in its journey to UK audiences.

Thankfully Bong Joon-Ho’s 2014 sci-fi classic has now arrived at its final destination in the form of Netflix.

Set in a Dystopian future, a failed attempt to reverse global warming has left the Earth in a state of perpetual winter. The only human life that remains circumnavigates the globe in a special train called the Snowpiercer.

The train is split up into classes with the rich and powerful living in comfort at the front with all the poor people crammed into the rear like cattle.

Existing in squalid conditions, surviving on nothing but gelatinous food bars that might be from the makers of Soylent Green, and spurned on by cryptic messages, Chris Evans’s Curtis wants to find out if life really is greener on the other side.

Like Gene Hackman’s Reverend Scott in The Poseidon Adventure, Evans leads a rag tag bunch (including Jamie Bell, John Hurt, Octavia Spencer) on a Titanic struggle up through the vessel following the icy track road to see Wilford, the wonderful Wilford of Oz.

Everyone is seeking something different (redemption, power, drugs, their children) and the hope is that Wilford can provide that for them, even if they have to use force to get it.

If Wilford is the man behind the curtain, Tilda Swinton’s Mason is The Wicked Witch of the West (Coast Line).

With her protruding teeth, hideous wardrobe and glasses as thick as her Yorkshire accent (Tilda Swinton’s Mason) is a comically grotesque character.

With her protruding teeth, hideous wardrobe and glasses as thick as her Yorkshire accent she is a comically grotesque character. Berating the dirty, grim soaked masses to remember their place, it feels like Thatcher and the miners during the 1980s.

At one point she makes a speech about how life must be kept in a delicate balance and this ties into the situation on the train which is on an eternal loop of the earth, a continuous cycle, with the natural order of the classes and the circle of life.

It sounds like a horizontal version of High Rise but this has more in common with the work of Terry Gilliam such as Brazil and Twelve Monkeys. One of the characters is even called Gilliam.

This graphic novel adaptation is a blend of science fiction and social commentary that plays out like a video game. Each new compartment represents a higher level and a different challenge, sometimes physical, mental or emotional. Different characters are required to progress and once complete the next compartment is “unlocked” by the train’s security designer controlling the doors.

The struggle to reach the front takes it toll on the group but it is Curtis who is constantly Under Siege. With it comes Chris Evans’ finest performance. A man struggling to do the right thing in an corrupt world. It was a showcase for what Evans was capable of bringing to the role of Captain America.

Snowpiercer has long been championed by those who got on board early on but now this (Caledonian) Sleeper hit will prove just the ticket on Netflix.