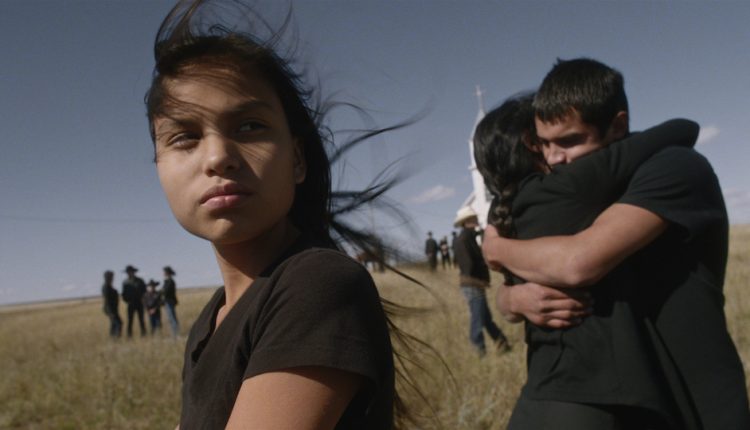 In 2015, the directorial debut film of a little-known director called Chloé Zhao premiered at Sundance Film Festival. It was later shown at Cannes, where it received a nomination for Caméra d’Or for best debut feature film. Now, as Zhao looks set for Oscar success with Nomadland, her debut film is now being exclusively streamed via the on-demand platform MUBI.

Set in South Dakota’s Pine Ridge Reservation, Songs My Brothers Taught Me focuses on the relationship between Lakota Sioux siblings Johnny (John Reddy) and Jashaun (Jashaun St. John). While his mother Lisa (Irene Bedard) seemingly abandoning her parental duties, Johnny acts as breadwinner by earning money as a bootlegger. However, his dreams of escaping the reservation for a new life in LA with girlfriend Aurelia (Taysha Fuller) threaten his strong bond with his sister, leaving her confused and lost.

Songs My Brothers Taught Me is a tale of two siblings. On one side, we have the quietly brooding Johnny, who is struggling to keep his family together. Despite his hardened exterior and illegal activities, short snippets of his school life briefly remind audiences that he is still a naive teenager with no comprehension of danger or real life. In addition, the fact that he has no concrete plan to survive in LA not only highlights his own selfishness in abandoning his family, but also his need to escape the remote wilderness of the reservation.

As one of the film’s younger characters, Jashaun struggles with her growing emotions. When her and Johnny’s bronco rider father passes away in an accident, she is the only one crumbling into tears and wears his old denim jacket in celebration. However, we soon see that she was spared the emotional damage of his abandonment, so while Johnny and her older half-siblings see him as an absentee father, all she feels is loss. This emptiness continues as her relationship with Johnny starts to fracture, causing her to bond with eccentric artist and recovering alcoholic Travis (Travis Lone Hill) and see him a ‘replacement’ father figure.

With her debut, Zhao offers a delicate insight into life on the reservation. Not only are there cultural snippets such as rodeo riders and Native American celebrations, but Songs My Brothers Taught Me also showcases the reservation’s history with alcoholism. Combined with the reservation’s poor social and economic status, alcoholism is treated as a corruptive force that has ‘contaminated’ the film’s adults, making them neglectful and irresponsible. As a result, the children in the film are seen as the ‘responsible’ ones.

Although it is a coming-of-age story, Johnny and Jashaun’s respective journeys are quite uneventful in places so the narrative ultimately struggles to find its feet under its protagonists’ emotional burden. The film’s slow pace is exacerbated by Zhao’s melancholic screenplay and Joshua James Richards’ picturesque cinematography, as he beautifully captures the chilling remoteness of the reservation. All we left is the natural performances of Zhao’s mostly unknown cast, who bring an understated depth to a character-driven drama.

Overall, Songs My Brothers Taught Me is a slow-paced yet moving coming-of-age that not only offers a stark insight into reservation life but allows Zhao to highlight her skills as a filmmaker.

Songs My Brothers Taught Me is now available on MUBI.