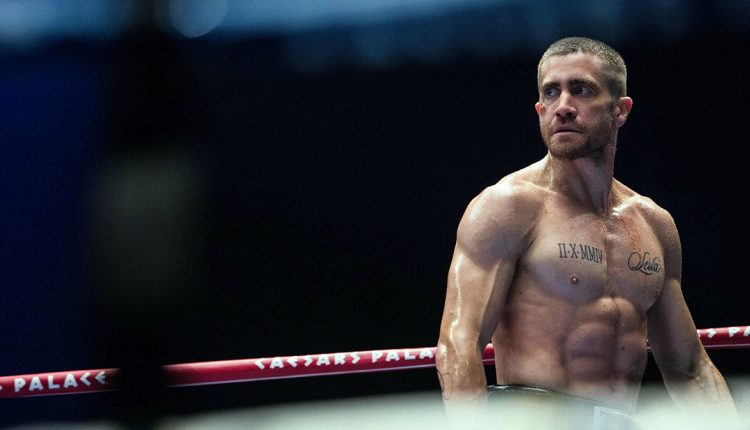 At the beginning of the movie Billy Hope (Jake Gyllenhaal) is light heavyweight champion and wins a big bout in Madison Square Garden. But then bad things happen and he falls very, very down, losing almost everything. His fortunes go south — is that what “Southpaw” means? But in a short time, maybe three and a half months, he regains the title. But what about that eye? Fuqua’s fight movie is routine, with the usual ingredients. The plot is so simple there’s nothing to chew on except the fallen champion’s struggle to regain the custody and love of his little girl Leila (Oona Laurence).

Jake Gyllenhaal seems to be straining to prove himself here. But to what end? He has achieved an impressively sinewy upper body — but that’s the standard for pro fighters nowadays. Fifty years ago an actor could star in a boxing film and not have to do a thousand pushups a day to get in shape for it. Last time, for Nightcrawler, about a bottom-feeding TV freelancer, a much more interesting movie, he lost a lot of weight, and his big raccoon eyes and keening voice made a strong impression, comical and creepy. Turning yourself into the facsimile of a champion boxer is more of a physical challenge, most likely (though going hungry is hard too), but Jake’s dialogue is a lot of mumbling, the attitude a mix of hangdog and fury. We see the powerful body, but it’s hard to get a fix on a personality here.

As narrative Southpaw’s scenes are boilerplate, but they have been excessively tweaked so they seem surreal. The aftermath of the first big fight sequence is striking this way, promising events that never come. Fuqua makes it look like Billy may be brain damaged and suffering from internal bleeding. He could be dying. Only that’s not part of the actual plot. All through the two hours the film toys with suspicions that Billy may be falling apart, yet the ending is his triumph. This unevenness of tone, these mixed messages, make the trajectory of Southpaw very unsatisfying.

Several plot elements don’t make much sense. Billy and his wife (Rachel McAdams) both came from the same hard knocks Hell’s Kitchen orphanage. How come then without her he is helpless? It could be; we just need some explanation. Then for his comeback, Billy goes to a new coach (Forest Whitaker), at an obscure Harlem gym coaching only ghetto youths, to learn a new style of fighting that contributes essentially to his regaining of the title in a Vegas match. But he won over forty bouts before his loss, so why should he need a style makeover? Or are the helpless champ who can only fight and not make any life or career decisions, and the defeated champ who must be reborn to win back the title both such commonplace tropes of the genre it’s foolish to question them?

Standard issue celebrity pieces like the recent cover story in Details depict Jake Gyllenhaal as getting lost in lightweight roles with Prince of Persia and Love & Other Drugs, finding himself again in serious ones with Denis Villeneuve (Prisoners, Enemy), Nightcrawler — and presumably Southpaw? Don’t write off Jake as a light comic actor: he is charming in the enjoyable Love & Other Drugs, hilarious as the simpleton in The Good Girl. His intensity plays well in many genres, none better than the moving Brokeback Mountain. Nightcrawler is a peak achievement, funny-weird and a physical challenge he set for himself. But he should stop trying too hard. Choosing a role just because it’s super-earnest or a physical challenge is not a good idea.

On the surface Southpaw is a pro effort all the way: its big fight scenes, at the Garden, in a Catholic cathedral, and at Vegas, are spectacular. Its cinematography is too in-your-face at times but it’s flashy. A good cast does their best, especially Whitaker as the hardscrabble coach and 50 Cent as the cold, soulless promoter. But these efforts cannot save the movie from its colourless conventionality. It’s an empty shell that makes Eastwood’s Million Dollar Baby and other boxing films with one fresh angle look like masterpieces. Southpaw’s noise and flashy staging can’t hide the fact that it’s so vapid and simplistic even Justin Chang’s description of it  in Variety as a “heavy-handed melodrama” seems too kind.

Southpaw debuted at the Shanghai festival and was released in UK cinemas 24th July 2015.

Robin Hardy – The Wicker Man and Beyond