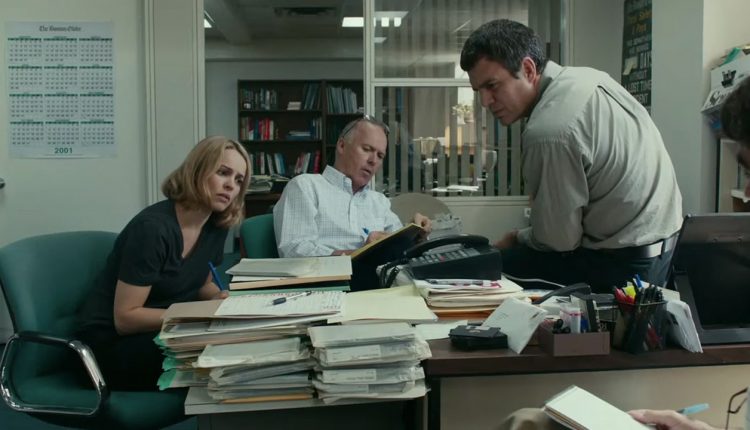 In 2003, the Boston Globe’s small ‘Spotlight’ team of investigative journalists uncovered a child sex abuse scandal incriminating the Boston archdiocese, which eventually created a global crisis for the Catholic Church.  In 2013, a screenplay about the team was listed on the year’s Black List of unproduced screenplays.  Now, it is one of the frontrunners of this year’s award season.

Spotlight focuses on the eponymous team, led by Walter ‘Robby’ Robinson (Michael Keaton), as new editor Marty Baron (Liev Schreiber) assigns them to investigate the sexual abuse case involving a local priest.  What starts off as a small investigation leads to a bigger, more shocking truth about the Catholic Church.

While there have been several documentaries about sexual abuse involving the Catholic Church, only a handful of feature films such as Pedro Almódovar’s Bad Education and The Magdalene Sisters dare to cover it as a subject.  But adapting the Boston Globe investigation poses a new challenge.  Rather than focus on the victims or priests involved, the screenplay by director Tom McCarthy and co-screenwriter Josh Singer concentrates on the power of journalism – by keeping the team (an indirect party) and their investigation in the foreground.

The script doesn’t try to over-embellish the extent of the abuse nor downplay the possible ramifications the article may have on Boston’s highly Catholic community.  Instead, it is sensitive on the subject matter and paints a bleak and honest picture of the events during the investigation.  From the compassionate interviews conducted by Sacha (Rachel McAdams) to the sobering comments from ex-priest Richard Sipe (Richard Jenkins), Spotlight – like the team – emphasises the need for the truth.

McCarthy presents the ensemble as a dedicated team that is essentially driven by professional duty, which guides the narrative and keeps audiences focused on their efforts.  A key moment involving journalist Michael Rezendes (Mark Ruffalo) delivers an unexpected reality check, reminding the audience that they are affected by their findings and the effect they will have on their readers.

While their characters all have their own personal connections to the investigation, such as Sacha’s Catholic grandmother and Robby’s former high school, the cast effectively shares the limelight with controlled and focused performances.  The result is a collective, well-crafted film about first-class journalism.

Overall, Spotlight is a mature drama with subtle performances and candid screenplay, creating a powerful and compelling take on investigative journalism.

Spotlight is out in UK cinemas on 29th January.