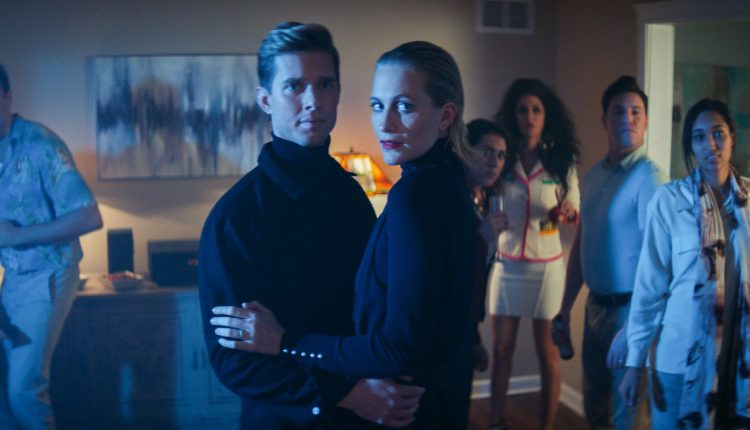 Spy Intervention – a new action / comedy / adventure from director Drew Mylrea and writers Mark Famiglietti and Lane Garrison (don’t worry, I’ve never hear of them either) – must make for one of the most painful viewing experiences I’ve recently sat through. As a result I will keep my thoughts as short as possible.

After meeting the delectable Pam Grayson (Poppy Delevingne), super-spy Corey Gage (Drew Van Acker) gives up a life of jet-set espionage for one suburban tranquility with the woman of his dreams. However the lure of the secret service proves too much, and he soon finds himself back at his old game and in over-his-head!

Given the current repeated postponement of the next James Bond adventure, Spy Intervention had the potential to fill a gap and prove a smash-hit. From advance promo material the film looked to be aiming to fall somewhere between 007 and Austin Powers, with the international espionage theme of one combined with the risqué humour of the other. Instead what you have is a film with a fake, comic-book’esque appearance which screams more suburban LA than downtown St. Tropez: the fact that several scenes take place in a sparsely peopled DIY superstore in some nameless, out-of-town, retail park speaks volumes. As for any attempt at laughs? Well if expletive ridden dialogue – I gave up counting after the tenth use of the ‘F’ word in as many minutes – and personal anatomy jokes are your forte, you should be ok, though most people outgrow this kind of schoolboy banter when they start wearing long trousers.

Which raises the main query concerning the film – namely who is it’s target audience? With too much adult related language and humour for younger viewers, yet lacking the depth or sophistication to appeal to anyone over the age of ten, the film tries to be too much to too many, but in the process ends up appealing to no one.

A major selling point of the film seems to be that it stars actress / model Poppy Delevingne (older sister of supermodel Cara). However, going by the limited opportunity given to her to display her thespian talents, one can only hope that she’s more successful at modelling. Her presence – along with a leading man with the posh sounding surname ‘Van Acker’ (who’s ‘Abercrombie & Fitch’ toned body is one of the film’s few high-points), and a writer (Famiglietti) who grew up in Rhode Island – gives the impression that the film was produced by a group of rich kids out for some fun which, one imagines, is the only way that those behind it could have got the money to finance the project in the first place.

I could go on, but really can’t be bothered. If you take my advice, neither will you.