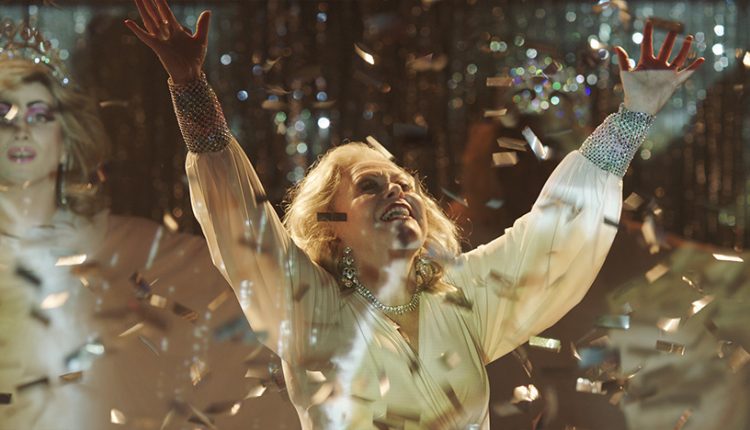 Jacki Weaver takes centre stage in Stage Mother. A bittersweet tale of acceptance and forgiveness, all wrapped up in hosiery, hairspray and high heels.

When a conservative church choir leader inherits her late son’s San Francisco gay club, she is forced to confront its crippling debts, its co-owner and son’s husband and her own prejudices.

On the surface, the film seems like a typical fish-out-of-water tale. One mixed with a Sister Act-style, turn-the-fortunes-of-the-club around scenario.

Take off the wig and wipe the make-up off and under the skin is a touching drama of an estranged mother coming to terms with her deceased son’s lifestyle.

It is a world away from her Oscar-nominated role in Animal Kingdom (where the people she cares for are more likely to wear animal print than act like animals). Here Jacki Weaver delivers a sweet, tender performance as the matriarch turned mother hen to a group of drag queens. Turning them from lip-synchers into a full blown musical act. She is a choir leader, confidante, babysitter and more.

At first she spends so much time focusing on the problems of others, she fails to confront her own issues that led to her own son cutting ties with her in the first place. A chance to forge a new path lies in bonding with her son’s partner (Adrian Grenier) and the child he fathered with a neighbour (Lucy Liu). The playbill is filled with too many supporting acts and once the screenplay trims the fat and focuses on the spotlight on Weaver, it truly starts to shine.

The film’s release comes at a time when UK has warmly embraced Ru Paul’s Drag Race. There is certainly a built in audience for this genre of film.

It is a more gentle, subdued affair than the likes of your Cabaret, Burlesque or Priscilla: Queen Of The Desert. What it might lack in terms of camp and chaos, it makes up for in heart. A Total Eclipse Of The Heart in fact.

Don’t drag your heels, just sashay away to the cinema to feel the warm embrace of the Stage Mother.

Stage Mother is in cinemas from Friday 24 July.