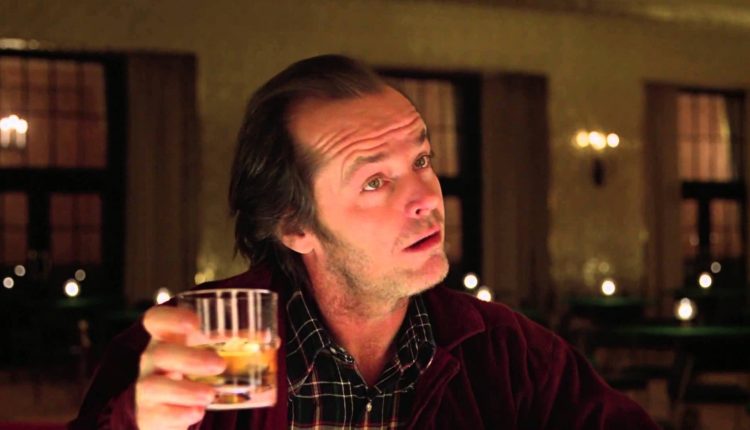 Slim pickings at the Overlook Hotel! If you’re new to The Shining and intend to read the book and see the film, for goodness’ sake don’t read the book first. Stephen King’s novel The Shining is a very different enterprise, the experience of which will colour your expectations for Stanley Kubrick’s film.

The novel uses traditional narrative tools of written fiction, as you’d expect We are led into a complex story through richly drawn characters whose dilemma is examined through metaphor and figurative structure. King’s outstanding achievement was to deliver such intellectual richness in the context of a brainstorming ripping yarn. Other than Thomas Harris, I can’t think of another writer who comes close (though if anyone has other suggestions please let us know!).

Stanley Kubrick of, most comparably, 2001: A Space Odyssey (also ostensibly a dramatisation of a popular novel from a “pulp fiction” genre), was an artiste of a completely different medium. He was a cineaste. By no means simply a dramatiser of written literature. And, like 2001, this film is not an adaptation of its source material, but a jumping-off point; the equivalent of a musical variation on a theme extracted from or based upon King’s novel. An essence is retained, but much of the narrative superstructure of the novel simply isn’t here. The setting becomes simply the context for an entirely different sort of statement, built out of different material: images and sounds, rather than words.

Thus, while we see scenes from the novel extracted almost verbatim, they are often delivered entirely devoid of context and absent of their consequences in the novel. So, through a series of arresting images we see Scatman Crothers’ Dick Halloran leave Miami and voyage by plane, car and snowmobile to the Rockies. Here, he is immediately cut down without serious investigation of why, or the tribulations and mental torment that the book describes in his getting there.

We see Jack Torrance’s yellow beetle crawling up to the Overlook Hotel, like a wasp to the nest, but we don’t see the dilapidated condition of the car. A state which, in King’s novel, stands in for the state of Jack’s mind and marriage. Jack’s alcoholism is tangentially referred to, once, but is not otherwise explored. Shelley Duvall’s Wendy is reduced to a feeble, shrieking wreck, without any of the strength or fortitude portrayed in the novel. I am prepared to give Stanley Kubrick the benefit of the doubt and grant that this was entirely intentional. That isn’t to say it is necessarily successful.

The trouble is, I don’t think Kubrick’s approach in this case works – whereas it undoubtedly did in 2001: A Space Odyssey. What we are left with is beautiful cinematography, disconcerting camera angles, a complex sound stage and high-budget production design, but little to ruminate on and nothing to quicken the pulse. It’s occasionally spooky, but never scary. There are fine set pieces, but Kubrick seems almost deliberately to defuse the thrills, even down to the constant bright lighting with which he floods his sets.

I concede this might be my prejudgement based on knowledge of the novel showing through. It may be that the back-story and metaphor Kubrick elected to omit dispel necessary tension and uncertainty in the motion picture.

But The Shining didn’t feel like it had enough substance left for me, and I didn’t easily understand the point of Kubrick’s cleverness with this directing. I was left with the sense that The Shining is a dated film, perhaps more an artefact of its time than a genuinely great film.