After being left hanging for two years, lightsaber outstretched, Episode VIII sees fledgling Jedi Rey (Ridley) seeking guidance from the legendary yet self-exiled Jedi master Luke Skywalker (Hamill). As The First Order retaliate against the Resistance after the destruction of the Starkiller Base, it seems that our heroes have no choice but to make their last stand against a vengeful Kylo Ren (Driver) and co.

From the off, the film strikes a peculiar and somewhat irreverent tonal balance. Thor:Ragnarok sprang to mind at first, where the LOLS arguably came at the detriment of the drama. Here though, the laughs are at the expense of the Star Wars mythos and its characters. Traditions are discarded and skipped over whilst once-threatening villains are scoffed at. And it‘s funny, but not always ‘haha’ funny. This is no doubt at the core of many fans’ displeasure, although those same fans may have forgotten the fun that was to be had in the Original Trilogy. Then again, that’s understandable: the Prequels will do that to you.

Rightly so, The Last Jedi is Mark Hamill’s film and he puts in a career-best performance that sticks a firm two-fingers up to those who once accused him of a clumsy, insincere delivery in the Original Trilogy. Failure, affection and a sense of humour are all intricately explored by Hamill, whilst seeing just how powerful Skywalker eventually became feels long overdue and air-punchingly satisfying. Anyone frustrated by his lack of lines in The Force Awakens gets more than their money’s worth here. 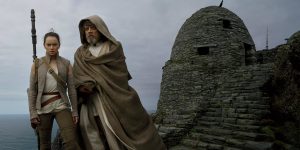 Nipping at Hamill’s heels is Kylo Ren, who continues to be the most interesting of the new crop. Coming across as truly conflicted as a result of some surprising circumstances, he’s no longer a petulant brat embroiled in the Dark Side: he’s detailed in shades of grey. To their credit, the developing dynamic between him and Rey is enthralling, even if it does tend to feel a little like an intergalactic “You’ve Got Mail.”

As you’d expect from Star Wars, the action set pieces are stunning. Poe’s one-man assault on a Dreadnought (think a Super Star Destroyer on steroids) makes you look at him with the same want that Finn does, whilst the battle on Crait makes Hoth look like Hyde Park’s Winter Wonderland. Even BB-8 gets to go HAM on a platoon of Stormtroopers.

It’s not all rosy though and George Lucas is probably to blame for some of The Last Jedi’s most glaring failures. Over-exposition in the prequels detailed the minutiae of the Jedi, exorcising any sense of mystery. So when certain narrative threads left from The Force Awakens are left un-pulled or suddenly severed, it’s frustrating and anti-climactic to all those that have spent two years theorising. Whilst it’s also oddly refreshing and undeniably brave, it does leave us with little upon which to speculate for the next two years. What are we supposed to do? Talk to our families? Ugh.

However, the issue with The Last Jedi isn’t that it takes Star Wars in a divisive new direction, it’s the basic storytelling that creates the disturbance. Where Director Rian Johnson breaks from the familiar and the formulaic which got The Force Awakens criticised, what replaces the familiar is more contrived than Naboo’s democratic process. Whilst there are no exhaust ports to bullseye and no oscillators to blow up, we instead get saddled with a McGuffin hunt which is all but a moot point by the third act and only serves to get Finn and Rose (newcomer Kelly Marie Tran) into a scrap on The Supremacy ship. All this adds is twenty minutes to the runtime and the tiring amount of last minute saves that our heroes enjoy. 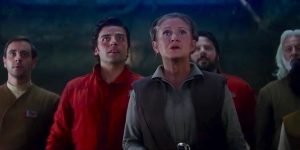 Leia thankfully has more to do than in The Force Awakens but an opportunity for a serene, beautiful farewell to the late Carrie Fisher was squandered here. Chewbacca is more or less shelved and it’s a shame that there’s so little of Finn and Rey’s chemistry on display. Instead we get half-baked, blink and miss ‘em characters such as Laura Dern’s Vice Admiral Holdo and Benicio Del Toro’s stuttering codebreaker DJ, whilst other key characters from Episode VII are shoehorned in and ticked off the list.

It’s difficult to hate on a Star Wars film, but it’s also easy to be blindsided by Snoke and mirrors (sorry). It’s far from the finest film in the saga and undeserving of the ‘better than Empire’ tag which keeps getting wheeled out. But it’s also far from the disappointment that others will have you believe. What The Last Jedi is though, is well worth the 30 year wait, and an intriguing indication of the saga’s future direction.

It’s a great Star Wars film, but it’s not a great film