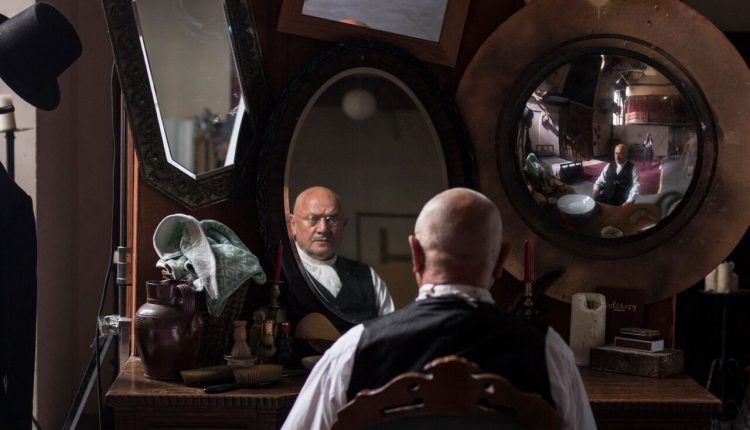 The secret to the classic tales of terror by Edgar Allan Poe, the American master of macabre short fiction, was just that – they were short. As a result their sharp and subtly shocking style suits them perfectly for snappy, succinct dramatic treatments, in say the form of an hour long TV slot. Which is what the new release, Steven Berkoff’s Tell Tale Heart (2019), should have been. And why the running time of twenty minutes over the hour, blunts the edge of what could otherwise have been a disturbing mini masterpiece.

Berkoff plays the sole servant (who remains nameless – a fact which adds to the film’s sinister air), of a wealthy gentleman (Dudley Sutton) who whiles away the fading years of his life in a gloomy townhouse in some Victorian London backwater. Though well taken care of, years of servitude to his master have clearly taken their toil on the old retainer’s mind who, one fateful, stormy night, tips into insanity, exacting a grisly revenge on his innocent employer with far-reaching repercussions.

And basically that’s it. This film is – according to the details accompanying its release – the first time Poe’s classic short story about the effects of a guilty conscience, has been given a longer screen treatment. Having watched it you do find yourself asking why the filmmakers decided to extend it over eighty minutes, when it feels an hour would have been enough to tell the story without loosing its impact.

This is however, as the title – Steven Berkoff’s Tell Tale Heart – implies, an interpretation of Poe’s tale designed as a showcase for Berkoff’s talents. Apart from a short period allotted to Sutton at the outset, and the film’s conclusion involving a posse of policemen called to investigate strange noises which have been heard emanating from the old man’s house, the proceedings belong to Berkoff. The actor who has made his name as one of Britain’s leading thespians in a career spanning over 60 years, carries what is to all intents a solo performance: Berkoff’s depiction of a man’s slow descent into madness – as a result of his obsession with his master’s wealth and power – which ultimately leads to his downfall, is a marvellously unsettling depiction of the intensity for which this star of stage and screen is renowned for bringing to his roles. For this alone the film is worth watching.

The minimalism which gives life to Sutton’s threadbare mansion and the twisted city alleys where its found, is magical. A combination of the physical objects and accoutrements of the dwelling – doors, staircases and furniture etc. – juxtapose beautifully with an animated depiction of a smokey, Dickensian London of which Disney would be proud. All of which combines in a backdrop that perfectly emphasises the gore and bloody mayhem that abound once the deranged Berkoff eventually sets to work dismembering, and then discarding of, what remains of the unfortunate Sutton.

In the end the resulting vicious vignette is a suitably atmospheric homage to Poe’s original tale, its only weakness being the dilution of its darkness by an extended playtime.